Notes: How one putt could start Olympic domino effect for Kuchar 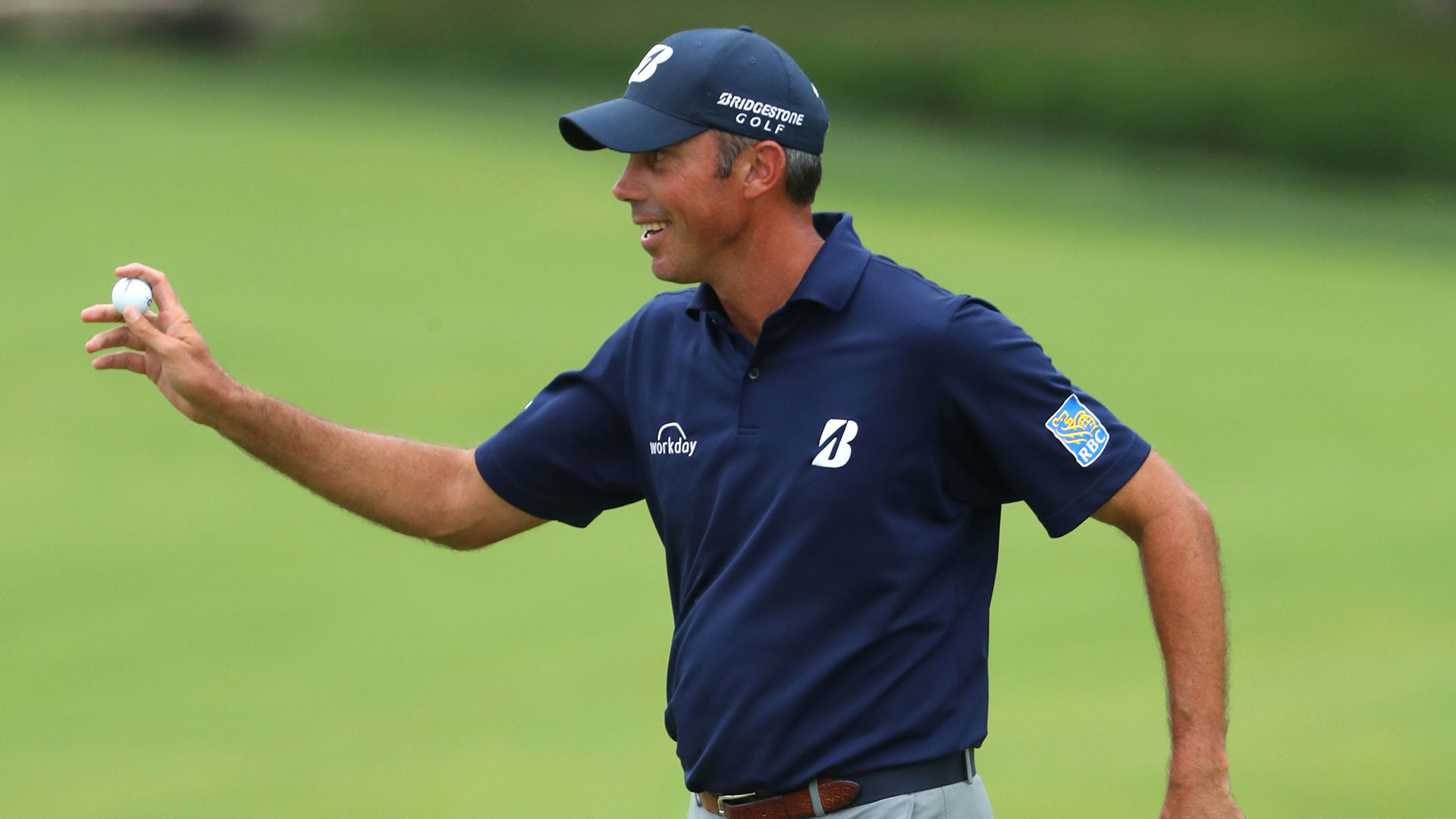 AKRON, Ohio – Matt Kuchar finished with a 12-foot birdie at the WGC-Bridgestone Invitational, which had no bearing on the outcome but still had a few ramifications.

Kuchar tied for third, so that putt was worth an additional $249,250. It cost Jordan Spieth enough world ranking points that Dustin Johnson moved ahead of him to No. 2 by the slimmest of margins.

And that birdie putt could send Kuchar to the Olympics.

Whether he earns a spot in Rio de Janeiro is now out of Kuchar's hands. The Americans are allowed the maximum four players because all of them are among the top 15 in the world ranking, and the birdie allowed him to move to No. 15. Still to be announced is which four Americans will go to Rio.

Of the top four in the world ranking – Johnson (2), Spieth (3), Bubba Watson (5) and Rickie Fowler (7) – Watson is the only one who has said he is going. The biggest question marks of that group are Spieth and Fowler. That's why Kuchar's birdie putt was so important, because if two Americans choose not to go, those spots could end up going to Patrick Reed and Kuchar.

Kuchar wants to play in the Olympics, though it's still a long way off. Not only does he need at least two players to withdraw, he has to be sure he stays among the top 15 in the world ranking after this week.

Olympic qualifying is based on the world ranking published next Monday, and that brings Phil Mickelson into the equation. Mickelson would have to finish alone in second at the Scottish Open – he won the last time it was held at Castle Stuart – to move ahead of Kuchar and be in position for any Olympic withdrawals. If Lefty were to win, he would have a mathematical chance to move ahead of Reed as the first U.S. alternate.

J.B. Holmes, Shane Lowry and Chris Wood also are at Castle Stuart and could bump Kuchar from the top 15 if they were to win. A victory by Wood likely would be enough for him to reach No. 15 and give the U.K. three players.

HURLEY NOTES: Billy Hurley III already delivered one of the most inspirational stories of the year when the former Naval officer won the Quicken Loans National at Congressional not far from his Virginia home, a tournament created to honor the military.

Then, he chose to give up his spot in The Open to honor a family commitment – his sister's wedding.

And it keeps getting better.

For the last few years, PGA Tour rules officials and other key employees have been receiving handwritten notes from Hurley thanking them for their work. When asked about this, Hurley smiled and said, ''I write a lot of notes.''

It's a lost art that goes back decades. Arnold Palmer once showed the way to a young Jack Nicklaus on writing thank-you notes to tournament directors in the 1960s. Hurley goes beyond that.

''I write to the tournament director, the superintendent and title sponsors, at least at the tournaments I'm playing,'' he said. ''And then the whole Tour staff. There's a lot of people that make this possible.''

Hurley doesn't know where he picked up this habit.

HOME SWEET HOME: Shane Lowry is playing the PGA Tour as a member for the first time this year, and what he hopes is many years to come.

But he has no plans for moving his home base away from Ireland. His role model is Padraig Harrington, a PGA Tour member for more than a decade who has never followed other Europeans by getting a home in Florida.

''I can't see myself moving to the States at all,'' Lowry said. ''As everyone knows, I'm quite friendly with Padraig, so he's done it for the last 15 years, traveled over and back. I'm not finding it too difficult.''

Lowry typically plays two or three weeks in a row before going back to Ireland. He usually can get out Sunday night and be home Monday.

''Dublin is my home now in Ireland, and I see that being the case for the next while,'' he said.

And how does he practice in the winter?

''I don't,'' Lowry said with a laugh. ''The weather is obviously not great. You can get out and hit shots for an hour. I just need to keep the rust away for me. ... I might play nine holes with my friends. I'm not one of these guys that feels like I need to practice all every day. If I play nine holes four, five times a week, I'm pretty happy.''

McGIRT DOES EUROPE: Memorial winner William McGirt is excited about his first trip to The Open, mainly because of links golf, but also one other oddity.

Yes, he has a passport. McGirt played in South America when he was on the Web.com Tour, and he played in Malaysia in 2012. He qualified for the Open by being in the top 20 in the FedEx Cup, and he's going over on the charter from Philadelphia.

''I'm looking forward to playing a completely different style of golf,'' he said. ''I grew up playing a golf course not manicured anywhere close to what we have out here. So I learned to play bump-and-run shots. Being able to use your imagination, that's the biggest thing I'm looking forward to, where there's no such thing as a standard shot.''

DIVOTS: Bubba Watson is all in for the Olympics, but he is leaving caddie Ted Scott at home. Watson said longtime friend Randall Wells will be on the bag for him in Rio. ... Jean Van de Velde, who lost a three-shot lead on the final hole in The Open in 1999 at Carnoustie, is making his PGA Tour Champions debut this week in the Dick's Sporting Goods Classic. ... The Greenbrier Classic has been canceled because of deadly flooding, but the charter flight to the British Open is still going. The same plane that takes players and others who would have been at The Greenbrier is the one that takes them from Scotland to the Canadian Open. The only difference? It now leaves Sunday night from Philadelphia. ... John Daly will be keeping a busy schedule the next two months. He begins his stretch of majors at Royal Troon for The Open and Carnoustie for The Senior Open. Then, it's back over the ocean to New Jersey for the PGA Championship at Baltusrol. Two weeks later, he has the U.S. Senior Open at Scioto in Ohio before heading back across the Atlantic to play the Czech Masters on the European Tour.

FINAL WORD: ''I work in the Army 14 years. ... And training every morning, that's why we come to play golf, I think really easy.'' - Thongchai Jaidee, a former paratrooper in Thailand, after his eighth European Tour victory in the French Open.