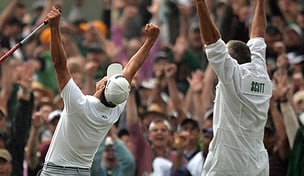 ATLANTA – Tiger Woods said he was tired. Phil Mickelson already was looking for ways to reduce his schedule by 25 percent.

''Just wait until next year,'' Jim Furyk said, more out of dread than anticipation.

The PGA Tour has agreed to create a week off before the Ryder Cup in 2014. That means two majors and a World Golf Championship in a four-week span. And then four straight FedEx Cup playoff events, including a three-day window between the final round in Boston and the opening round in Denver.

And don't forget: With the new wraparound season, ''next year'' is only 16 days away.

That leaves just enough time to review a 2013 season marked by weather (wind, fog, snow), surprises and slumps, rules violations, deer antler spray and the first time in 24 years that none of the 54-hole leaders in the majors went on to win.

The PGA Tour announces its player of the year on Friday. Here are a few other awards to consider until then.

COMEBACK PLAYER OF THE YEAR: The PGA Tour did away with this award a few years ago because too many winners were ''coming back'' from bad play rather than a serious injury. Henrik Stenson would be the popular choice under that context.

The winner, though, should be Boo Weekley.

Three years after playing in the Ryder Cup, he lost his full PGA Tour card and then failed at Q-school. Playing on sponsor exemptions in 2012, he earned back his card on the last day of the season with a 67 at Disney. Weekley started the year at No. 299 in the world. He won at Colonial, advanced to the Tour Championship and now is among the top 50. He will be playing all four majors next year for the first time since 2009.

BEST YEAR WITHOUT A WIN: Steve Stricker won $4.4 million despite going into semi-retirement. He was runner-up at Kapalua, Doral and the Tour Championship. Then again, he played only six fewer tournaments than normal.

The nod goes to Graham DeLaet of Canada, who was 95th on the money list a year ago. He had seven top 10s, more than his previous two seasons on tour combined, and two of his best results came in the FedEx Cup playoffs. DeLaet played in his first two majors, rose to No. 32 in the world and earned a spot on the Presidents Cup team.

PACE OF PLAY AWARD: The 30-man field at Kapalua.

A fluke weather pattern that brought 40 mph gusts was so bizarre that the Tournament of Champions didn't start until the day it was supposed to end. Rickie Fowler hit the opening tee shot on Monday morning, and the 54-hole tournament ended 29 hours later. It can be done.

TIMING AWARD: Vijay Singh filed a lawsuit against the PGA Tour for ''public humiliation and ridicule'' over its investigation of his admission that he used deer antler spray, which was reported to contain a banned substance.

BEST DECISION: Jordan Spieth had a pair of top 10s in South America and was closing in on full Web.com Tour status for the year. He wanted to go to Chile to lock up his card, but the Texas teenager felt compelled to honor a sponsor's exemption he had received in the Puerto Rico Open.

Spieth tied for second, which got him into the Tampa Bay Championship, where he tied for seventh.

He then earned enough money to secure a PGA Tour card, became a PGA Tour member by winning the John Deere Classic, locked up a spot in the Tour Championship with a 62 on the final day at the TPC Boston, was picked for the Presidents Cup team and ended the year 10th on the PGA Tour money list.

Just think if he had gone to Chile.

WORST DECISION: Even with video evidence that his golf ball moved slightly as he tried to remove a twig, Woods maintained that it only oscillated. It was clear enough that he was given a two-shot penalty. Woods accepted the penalty. But in seven answers to the media, he insisted the ball didn't moved.

BEST ROUND: Jim Furyk at the BMW Championship became only the sixth player in PGA Tour history with a 59, and the only one to do it with a bogey on his card.

BEST ROUND BY A WINNER: Phil Mickelson shot 66 on Sunday to win the British Open at Muirfield. Some call it the best closing round in a major. It would have to rank behind Jack Nicklaus' 65 at the 1986 Masters, and Johnny Miller's 63 at Oakmont. It was the best on Sunday at Muirfield, which is all that mattered to him.

BEST SHOT: Justin Rose's 4-iron to the 18th at Merion to wrap up the U.S. Open. Too bad it didn't stay on the green, but that wasn't his fault.

BEST PUTT: Adam Scott's 20-foot birdie on the 18th hole in regulation at the Masters.

BEST ADVICE: Steve Williams, the caddie for Adam Scott, who said before they walked off the green, ''This isn't over yet.'' And it wasn't.

BEST YEAR: Arnold Palmer. He hosted a PGA Tour event at Bay Hill for the 35th year, and this time was able to stick around to see Woods win. His Pittsburgh Pirates clinched a playoff berth for the first time in 21 years. He celebrated his 84th birthday. And he had dinner with Kate Upton.