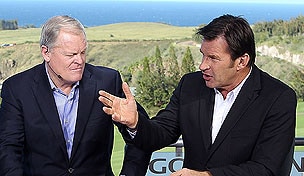 KAPALUA, Hawaii - Johnny Miller was quick to point out how different he and Nick Faldo were as players, and he said this with some regret. Miller aimed at every flag he saw. Faldo was more of a strategist.

“Nick was the ultimate in restricting the temptation, playing a cautious game - middle of the green, swing easy, basically think his way around in a non-exciting way,” Miller said. “And that lent itself to winning majors.”

Miller won 25 times on the PGA Tour but had only two majors - the 1973 U.S. Open at Oakmont (lest anyone forget, he shot 63 in the final round) and the 1976 British Open at Royal Birkdale over a rising teenage star named Seve Ballesteros.

Faldo won six majors, three times each in the Masters and British Open.

“I played just the opposite,” Miller said. “I hit it as hard as I could, fired at every flag stick, and that lends itself to having train wrecks in the majors. If I had to do it over again, I’d have two gas pedals - one of the majors, one for the regular tournaments. I never figured that out.”

HAT FOR SALE: Scott Piercy’s hat looks like a blank billboard, which is about what it is.

Piercy has Titleist on one side of the hat and FootJoy on the other. The front was supposed to be another corporate sponsor but the deal fell through. Piercy, the Reno-Tahoe Open winner, wasn’t going to give it away for free.

“We had a couple deals that looked like they were going to close, and they fell through at the last minute,” Piercy said. “As everyone knows, it’s tough out there right now. The deals that we did have weren’t the greatest, so we decided to keep it blank.”

Piercy said he had a few offers, but “we didn’t get anything that we felt was fair.”

The hat deal didn’t sour his mood - not in the least. Piercy made his first trip to the winners-only Tournament of Champions and tied for 12th after a rocky start.

Next up is the Sony Open, and Piercy already has noticed a change that comes with winning. He has a two-year exemption on the PGA Tour and no longer feels he has to rush into the year.

“It’s nice not to play for three months and have the first tournament be one you can kind of work into it, instead of showing up at Sony and having a so-so day or two and you’re going home,” he said. “You have a so-so day or two here, you still have the weekend.”

At Waialae, the course will be filled with rookies eager to get going.

“They’re like, `Oh, man, I finally made it to the PGA Tour.’ We’ve all seen that. I’ve done it,” he said. “As a rookie, you’ve got to kick butt on the West Coast, and everybody but the rookies know it. So it’s nice to ease into the year.”

AMERICAN RICHES: The Race to Dubai was announced with great fanfare for 2009, which was to conclude with a $10 million purse at the Dubai World Championship and a $10 million bonus pool.

Because of the economic crisis, the prize fund for both was reduced to $7.5 million.

Going into its fourth year, the bonus pool for the top 10 players now is $3.75 million, with $1 million going to the winner - that compares with $10 million for the FedEx Cup champion on the PGA Tour from a $35 million bonus pool.

The good news for Europe is that it extended its agreement for the Race to Dubai through the end of 2014.

GOLF CHANNEL: The Golf Channel must wait a few days to see if that Monday finish at Kapalua helped the viewership. But it couldn’t complain about the start of the new season.

Coming off its biggest year, Golf Channel began 2012 with the highest-rated opening round at Kapalua since it began broadcasting the Tournament of Champions in 2007. Friday’s coverage averaged 705,000 viewers (0.7 household rating), up 27 percent over Round 1 at Kapalua last year, and 50 percent higher than any previous opening round Golf Channel has broadcast at Kapalua.

DIVOTS: Martha Lang has been appointed to another one-year term as chair of the USGA’s Women’s Committee. … Gaylord Sports Management, whose list of clients includes Phil Mickelson and Nick Watney, has been acquired by French-based Lagardere Unlimited. Steve Loy, who founded Gaylord in 2000, will be the president of Lagardere Unlimited Golf. … Ryo Ishikawa is beefing up his U.S. schedule. Along with playing in the Sony Open, the Japanese star has accepted a sponsor’s exemption to play the Farmers Insurance Open at Torrey Pines. David Duval also received an exemption to Torrey Pines. … Of the last 20 winners of the Tournament of Champions, Daniel Chopra (2008) is the only player who failed to make it to the Tour Championship. … Hunter Mahan has renewed his equipment contract with Ping.

FINAL WORD: “This is really the first and only event that is kind of like a congratulations for winning.” - Scott Piercy, making his debut in the Tournament of Champions at Kapalua.