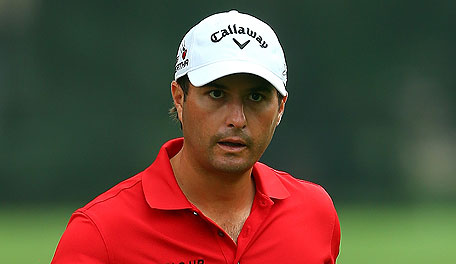 UNIVERSITY PLACE, Wash. – Kevin Kisner had to wait until a week before the U.S. Open to find out for certain that he had a spot in the field at Chambers Bay.

He'll have a little more time to prepare for the next major.

As many as nine spots for the British Open are available this week at the Travelers Championship.

Kisner is not playing, though that shouldn't matter. The leading five players – not already exempt – from the top 20 in the FedEx Cup will be part of the field at St. Andrews next month.

Kisner already has playoff losses at Hilton Head and The Players Championship. His tie for 12th at Chambers Bay moved him up to No. 14 in the FedEx Cup, making him virtually a lock for the British Open.

Charley Hoffman (No. 6) and Robert Streb (No. 11) also are set to be exempt. Both won PGA Tour events in the fall. Steve Bowditch, who won the AT&T Byron Nelson, is at No. 18. He essentially needs to make sure he stays in the top 20 after the Travelers to be exempt.

Everyone else from the top 20 already is in the British Open. Daniel Berger, the Tour rookie who lost in a playoff at the Honda Classic, is at No. 27 and would need a solo third place to get into the top 20. But then, third place would get him to St. Andrews, anyway.

The leading four players who finish in the top 12 at the TPC River Highlands also are exempt. The Travelers is the first of three PGA Tour events where top finishers can get into St. Andrews. There are four spots available at The Greenbrier Classic, and one spot at the John Deere Classic.

AUSSIE OMEN: Anyone looking to win a major might want to consider playing the Australian Open this year.

Rory McIlroy was going through a slump in 2013 after going through a management change. He finally won at the end of the year in the Australian Open when he birdied the last hole to beat Adam Scott.

The next year, he won back-to-back majors at the British Open and PGA Championship.

Jordan Spieth was winless on the PGA Tour in 2014 until he found his form late, starting with a 63 in the final round to win the Australian Open.

He has won the past two majors.

MAJOR SHARING: Jack Nicklaus once pointed out that rivalries in golf don't always require going head-to-head as much as trading off victories in the majors. Nicklaus and Arnold Palmer had that 18-hole playoff at Oakmont that Nicklaus won in the 1962 U.S. Open, but they rarely battled each other on the back nine.

That's been the case with Rory McIlroy and Jordan Spieth, though it's very early. Spieth is just 21.

They were paired together for the opening two rounds of the 2013 Masters (Spieth tied for second) and the 2014 British Open (McIlroy won). They have played in the same event only five times this year, and only 13 times in the last year.

The last time four consecutive majors were split by two players was in 1972. Lee Trevino won the U.S. Open and British Open at the end of 1971 (the PGA Championship was in February that year), while Nicklaus won the Masters and U.S. Open in 1972.

That's happened only three other times since the PGA Championship began in 1916:

- Bobby Jones won the British Open and U.S. Open in 1930, and Tommy Armour won the PGA Championship and the 1931 British Open (the first major of the year).

- Walter Hagen won the PGA Championship in 1925, Jones won the British Open and U.S. Open in 1926, and Hagen added the bookend with another PGA title in '26.

- Hagen won the 1921 PGA and the 1922 British Open, followed by Gene Sarazen winning the U.S. Open and PGA Championship.

YOUTH IS SERVED: For the first time in 90 years, five straight majors have been won by players in their 20s – Jordan Spieth (21) in the U.S. Open and Masters, Rory McIlroy (26) in the British Open and PGA Championship, and Martin Kaymer was 29 when he won the U.S. Open at Pinehurst No. 2 last year.

Walter Hagen was 28 when he won the 1921 PGA Championship, the start of seven consecutive winners in their 20s (Hagen twice, Gene Sarazen three times, Bobby Jones and Arthur Havers).

DIVOTS: Ollie Schniederjans will play the British Open (he's exempt as the No. 1 amateur in the world last year) and then turn pro. He will try to play a number of PGA Tour events, and possibly some Web.com Tour events, and at least try to qualify for the Web.com Tour Finals (the new version of Q-school). ... The Australian PGA Championship will be counted as a European Tour event for next year. It will be played Dec. 3-6 at Royal Pines Resort on the Gold Coast. ... Martin Kaymer can go back to the PGA Grand Slam of Golf even if he doesn't win a major this year. Because Jordan Spieth has won the first two majors, the tournament goes to its alternate system. Kaymer gets in as the defending champion. If Spieth (or Kaymer) wins another major, a points list from the majors will be used.

STAT OF THE WEEK: Jordan Spieth and Tiger Woods are the only players since World War II to win at least four times on the PGA Tour before turning 22. Woods had six wins and a major. Spieth has four wins and two majors.

FINAL WORD: ''You have to use your brain, which is a rare thing in modern golf and something we're not very good at, I don't think.'' - Geoff Ogilvy, on playing Chambers Bay in the U.S. Open.