KAPALUA, Hawaii – Nothing was familiar about Geoff Ogilvy’s return to Kapalua except the winner’s lei draped around his neck.

Ogilvy was playing a new brand of equipment, with conforming new grooves in his wedges. Instead of a family vacation on Maui, his wife stayed home in the final month of her pregnancy. The superstitious stubble from last year gave way to a clean shave. The biggest change of all was the scorecoard – instead of a comfortable lead, Ogilvy had to rally.

That’s what made his victory Sunday in the SBS Championship so gratifying.

A year after winning by six shots, Ogilvy made up a two-shot deficit over his final 10 holes with smart decisions and flawless golf for a 6-under 67 and a one-shot victory over Rory Sabbatini, making him only the second repeat winner at Kapalua.

Even though he was stunned to see Sabbatini run off five straight birdies and close with a 63, Ogilvy knew what he had to do. He wasn’t playing the course, or even a player. He was playing against a number.

“If you beat Sabbo’s score, you’re going to win the tournament,” Ogilvy said. “It’s hard to make birdies when you have to make birdies. I’ve had that situation with a couple of holes to play, but never with nine holes to play. I’m pretty proud of the fact I did it.”

Ogilvy posted his eighth consecutive round in the 60s at Kapalua and joined Stuart Appleby, a fellow Australian, as the only players to win in consecutive years since the winners-only season opener moved to Kapalua in 1999. Appleby won three straight years. Only five other players have won back-to-back in the 58 years of this event.

“I like the golf course, I think it’s fair to say,” Ogilvy said.

Even though he trailed in the middle of his round, Ogilvy still had plenty of holes in front of him.

He played short of the par-4 14th, a 272-yard hole where most players were hitting driver, and pitched to 4 feet for birdie. And he took the outright lead with a 5-wood into 25 feet for a two-putt birdie on the 15th.

With so much talk about the V-shaped grooves required this year, Ogilvy said that helped him on the 14th, where it’s easy to spin the ball off the front of the green and back into the fairway.

“I was happy with the smart play, and it paid off,” he said.

Sabbatini, who started the final round six shots behind, ran off five straight birdies on the back nine to seize the lead. He couldn’t reach the green on the 663-yard 18th in two, however, and missed a 10-foot birdie putt that ultimately cost him.

“I said to my caddie, ‘We need to birdie the last two holes to have a chance,”’ Sabbatini said. “The situation was you had to keep moving forward to put pressure on him. I had my opportunity, and unfortunately, it didn’t pan out.”

Ogilvy finished at 22-under 270 and moved back into the top 10 in the world with his seventh career PGA Tour victory.

It was his first win since the Match Play Championship last February. The trick now is for Ogilvy to keep this form throughout the year, and he hopes he can learn from mistakes a year ago when he tried too hard and practiced more than usual.

He is taking next week off before playing in Abu Dhabi, then returns home to Arizona for the birth of his third child.

U.S. Open champion Lucas Glover’s bid to become the second straight wire-to-wire winner at Kapalua ended early when he hit into the hazard on consecutive holes and lost three shots. He closed with a 76 and was 14th in the 28-man field.

Matt Kuchar lingered without seriously threatening, missing several chances on the middle of the back nine as Ogilvy pulled farther ahead. He closed with a 67 and finished alone in third.

Sean O’Hair made all the right moves to give himself a chance. He was at 20 under, two shots out of the lead with a chance to reach the par-5 18th in two. He was quick with his swing and pulled it into the weeds, leading to double bogey and a 68 to finish fourth.

The Kona wind returned again, which makes Kapalua a tough start and finish, with birdies available in between and trouble on any hole with a poor shot. Sabbatini breezed through with a 32 on the front to get in the mix,

“I was just battling the putter the first three days,” Sabbatini said. “I came out today not knowing what to expect, and the flat stick showed up early.”

Even so, he got some help from the leaders. Ogilvy was in the lead until he pushed his tee shot badly to the right and into the knee-high native grass for a one-shot penalty. Glover followed him into the hazard, and both made bogey. From the middle of the next fairway, Glover came out of his shot and shoved it into the high grass again, leading to double bogey. While he bounced back with two birdies, a three-putt on the 10th ended his chances.

Sabbatini, a bundle of South African energy who always looks to be in a hurry, wasted no time seizing the lead.

He attacked a dangerous pin on the par-3 11th with an 8-iron for the first of five consecutive birdies, finishing the streak by driving to the back of the green on the 282-yard 14th and hitting his approach to the par-5 15th to 15 feet for another easy birdie. Most impressive was a 5-iron into 12 feet for one of only two birdies on the 552-yard 17th.

That was supposed to be the hard part of his plan to birdie the last two holes. His 10-foot birdie putt on the 18th caught the right lip.

DIVOTS: For only the second time at Kapalua, everyone in the winners-only field broke par. Mark Wilson and Heath Slocum tied for last at 2-under 290. The other time was in 2003, when Rich Beem finished last at 290. … All but eight players are going over to Honolulu for the Sony Open next week at Waialae. … Paul Casey, battling a rib injury since July, had his first top-10 finish since Colonial. 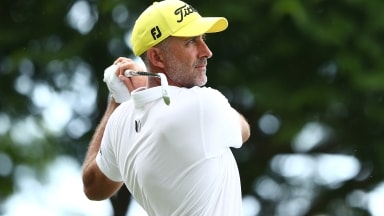 Former U.S. Open champion Geoff Ogilvy is back on the PGA Tour. He’s just not sure for how long, or even where.