One for the Aussies: Scott's memorable Masters victory 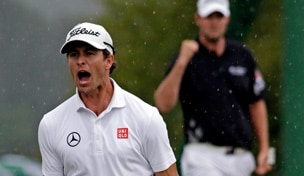 Getty Images
The U.S. team watches the action on the 18th hole during the Day Four Singles Matches at the Muirfield Village Golf Club on October 6, 2013 in Dublin, Ohio. (Photo by Andy Lyons/Getty Images)  -

Adam Scott considers it the signature moment of his career, even if it wasn't the putt that made him the first Australian to win the Masters.

It was the stage – the 18th green Sunday afternoon at Augusta National. It was the moment – tied for the lead, a 20-foot birdie putt across the green to a front left pin, the kind of putt Masters champions make.

It was the reaction when it swirled into the cup. The right uppercut. He planted his feet so he could pump both arms, the left one still holding his long putter, and he let loose a spontaneous scream that reverberated Down Under. ''C'MON AUSSIE!''

Even more meaningful was the photo.

Scott didn't see it until a couple of days after he slipped on that green jacket. The photo was sent to him by some Australian caddies, and it touched him the way it did so many others. As Scott lined up the biggest putt of his life, he could not have seen Marc Leishman standing behind him.

The putt disappeared into the cup. Scott cried out with the purest joy. And there was Leishman, pumping his right fist to celebrate.

Scott was blown away by the photo.

''I immediately texted Marc after that, because that's one of my favorite things of the whole experience,'' Scott said. ''From the point of that putt going in, the next two hours was just a wealth of incredible experience. Your senses can't handle all that stuff. But then when I saw that with Leish, now I look back on that as one of my favorite things at Augusta, and an incredible sense of national pride there, and what a top bloke he is for that kind of reaction.''

Leishman was in the running for a green jacket, too.

He was paired with Scott in the final round. They both were 6-under through 12 holes, two shots behind Angel Cabrera, and heading into the pivotal six-hole stretch on the back nine of Augusta National. Disappointment set in when Leishman's approach to the par-5 15th came up just short and into the water.

''He had just as good a chance as me to win,'' Scott said. ''So it's a big thing to think you've got a chance to win the Masters, and then you're standing on the 18th green and you know you don't. But to have the character to stand there and be happy for someone else just says a lot about Marc, for sure.''

His actions spoke for all of Australia.

Jim Ferrier was the first Australian-born golfer to finish second at the Masters in 1950. Greg Norman turned it into an art form, building Aussie hopes with each close call. But after Norman lost a duel with Jose Maria Olazabal in 1999, no one seriously challenged for the green jacket again until 2011. Scott, Jason Day and Geoff Ogilvy all were in the mix on the back nine until Charl Schwartzel of South Africa won by closing with four straight birdies.

''It was every second year with Greg, and then we had the tease two years before with Jason and Adam,'' Ogilvy said. ''That got everyone back into it.''

Ogilvy failed to qualify this year for the first time since 2005. He was driving from San Diego to Phoenix during the final round, getting updates by the minute on Twitter. Like so many other Australians, as thrilled as Ogilvy was for his mate, the photo caught his attention.

His eyes immediately went to the one part of the photo not in focus – Leishman.

''There are not many photos that the most important part of the photo is not the start of it,'' Ogilvy said. ''There's Leish. And you see Adam. And you say, 'Is that not the best photo ever?' And it's not because of Adam. There are thousands of photos of him fist-pumping. It's just a moment in time. It sums up what it meant to Australia, and it sums up what Australians admire in a person or want to be.

''Everyone thinks of their mates,'' he said. ''And great mates, that's what they do. At that point, it was the biggest moment in sport for us. We climbed every other Everest in sport. That was the one thing we hadn't done.''

Leishman pumping his fist was as spontaneous as Scott's own reaction. He was simply caught up in the rawest of emotions. The only other time he could recall celebrating so publicly was for an Aussie Rules football team. ''Not for another golfer that's on the course with me at the same time,'' he said.

''I was just hoping he would hole the putt – for him, for Australian golf, for everything it meant,'' he added.

Leishman had 3 feet left for par to tie for fourth, his best finish in a major. He was lucky it wasn't longer. Leishman could barely hold the putter after Scott made birdie, more out of pain than emotion.

''He came over and hit my hand and was screaming, 'C'mon, Aussie!' And he hit it hard,'' Leishman said with a grin. ''My right hand, I couldn't feel it. It was bright red. I put my hand on the club and said, 'Please, please go in.' It was a pretty big putt for me. It went right in the middle. It was worth it.''

Leishman walked in the door of his rented house in time to catch the winning moment – Scott making a 12-foot birdie putt at No. 10 to win on the second playoff hole against Cabrera. Another celebration, this one more private.

He first saw the photo the following day when it was posted on Facebook pages.

''I obviously knew there were a lot of cameras around. I just didn't think I would be in the photo,'' Leishman said. ''It really captured the moment well of what it meant to him. He doesn't go off like that often – ever. I was proud to know that I did that for a fellow Aussie. I was just happy for my friend.