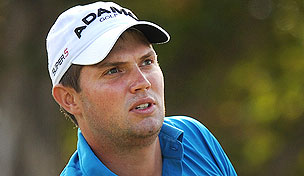 Once he finally made a putt Thursday in the Frys.com Open, Overton felt as if he couldn't miss. Over the last 11 holes at CordeValle, he made three birdie putts over 25 feet and a 20-foot eagle putt when his gamble paid off on the par-5 ninth.

He finished with a tap-in birdie on the 18th for a 7-under 64 and a one-shot lead over Brian Harman.

''It really helps if you can get off to a good start,'' Overton said. ''It would be great if we can continue this thing and keep it rolling.''

Harman finished with back-to-back birdies from short range and had eight birdies on his round. Kyle Stanley had a 66.

The group at 4-under 67 included Michael Putnam, who won the Web.com Tour money title last season to earn full status, and Brooks Koepka, the most traveled player at the Frys.com Open. This is the fourth tour Koepka has played this year. He earned his European Tour card by winning three times on the Challenge Tour. He also played a Web.com Tour event, and the Florida State alum is headed to China in two weeks for the BMW Masters.

Ryo Ishikawa, who had to earn his card back at the Web.com Tour Finals, opened with a 69. Hideki Matsuyama, one of three players at the Presidents Cup last week, had a 70.

The PGA Tour season is starting in October instead of January for the first time in history. The official season ends next September at the Tour Championship, although there will be a six-week break leading to the Tournament of Champions in Hawaii.

Officially, it was the start of the 2013-14 season Thursday. It was different from previous ''season openers'' in Kapalua.

The temperature was struggling to climb past 50 degrees when Bryce Molder, wearing rain pants to cope with the morning chill, hit the first shot of the year. He yanked it left and nearly couldn't find it, which would have meant going back to the tee to his third short.

The fairways weren't 80 yards wide. And it wasn't a tropical 80 degrees.

He was on the putting green, in the third group, when he had to use the bathroom. He thought he had plenty of time. He was wrong. Vegas was a few seconds later to the tee box, meaning a two-shot penalty. His first swing of the new season technically was for birdie from 412 yards away. He made par, plus two shots for a double bogey.

''I was just caught off guard,'' he said. ''It never crossed my mind I would be late to the tee. I made a mistake and I paid the price. It's not an easy way to start the year''

Overton, who remains the only American to play in the Ryder Cup without ever having won on the PGA Tour, had a year in which just about everything went wrong. He didn't play in any of the majors for the first time since 2007. He was disqualified from Colonial when he thought he could use a training aid to practice putting when there was a delay at the turn. He opened with a 69 in the John Deere Classic and had to withdraw when he felt shooting pain in his right wrist.

And he was the alternate who didn't get in the PGA Championship, leading to a series of angry tweets toward the PGA of America for not giving him an exemption to a guy who played in the Ryder Cup at Wales three years earlier.

Overton said only that ''everything is all good'' when asked about his relationship with the PGA of America.

He hopes the same can be said about his game this year, especially after spending the last few months moving to a stronger grip to alleviate recurring pain in his left wrist. It worked beautifully on a sunny day in the foothills south of San Jose, especially the baby cut he hit into 20 inches on the 18th.

The most important shot he hit all day might have been a 6-foot putt for par on the seventh.

Overton hit the ball so well on the first six holes that he had only one birdie attempt longer than 15 feet and missed everything. But he made the par putt on the seventh, and seeing the ball go into the hole was all it took to send him on his way.

''Next I knew, I made everything,'' he said. ''I saw the ball go in the hole one time, and was just chipping and putting it in – just everything. It was just one of those days that went my way at the end.''

He all had a gamble pay off, hitting 3-wood into the breeze from 244 yards to a green guarded by water. He aimed right and caught it perfectly with a draw, and the ball settled 20 feet away to set up eagle.

DIVOTS: Nine players are still looking for their first birdie of the year. ... Alex Aragon came to the course Thursday morning as the first alternate expecting a long day of no golf. He got the word at breakfast that John Merrick had to withdraw, and he opened with a 68. ... Robert Allenby opened with a 68. It was the first time since The McGladrey Classic one year ago that he broke par in the opening round.