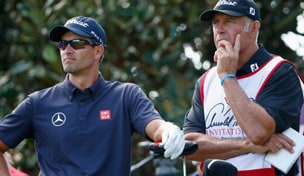 Getty Images
SAMMAMISH, WA - JUNE 11: Cheyenne Woods reads her putt on the first hole during the third round of the 2016 KPMG Women's PGA Championship at the Sahalee Country Club on June 11, 2016 in Sammamish, Washington. (Photo by Montana Pritchard/The PGA of America via Getty Images)  -

ORLANDO, Fla. – Masters champion Adam Scott was feeling ill when he arrived at Bay Hill. One majestic round with the putter Thursday made him feel a lot better.

Scott made five putts from about 20 feet or longer, two of them for eagle and one of them from off the green for birdie, and matched the course record with a 10-under 62 to build a four-shot lead in the Arnold Palmer Invitational.

The conditions were close to perfect. So was his work on the greens.

''I made a lot of putts today, and a lot of putts from considerable length,'' Scott said. ''I hit a lot of nice shots, too, but it wasn't like I was hitting it 4 feet. I had a round like this in Australia at the end of last year – in the first six holes, I didn't hit it outside 5 feet. There's a lot of different ways to get the ball in the hole. But it's good for the confidence. It's what I wanted. I sat in here yesterday and said I'd like to make some birdies and build the confidence. And today is a good start to that.''

Gonzalo Fernandez-Castano had his best round of the year with a 66 and was all but forgotten.

Scott walked from the ninth green across the practice range to the scoring trailer as one player after another turned his head and asked how low Scott went on the day. One caddie quipped, ''Is there a 10-shot rule when you haven't teed off?''

It was the lowest round in 30 years at Bay Hill, and it was good enough to make a large gallery following Scott forget for a moment that defending champion Tiger Woods is not here this week because of a back injury.

Brandt Snedeker, Morgan Hoffmann and Paul Casey were at 67.

''Can we ban that putter the rest of the week?'' Snedeker said with a smile when told about Scott's round with his long putter. ''He's playing unbelievable. He's one of the best players in the world right now. I don't think 10 under is doable for me.''

Patrick Reed had a 69 while playing with Scott. The third member of their group, U.S. Open champion Justin Rose, struggled with his putter early and shot 71.

''Awesome round,'' Rose said. ''He putted like a Masters champion.''

After watching Scott make another putt – this one from 20 feet for eagle on No. 4 – Rose asked if Scott could get to No. 1 if he were to win at Bay Hill. The answer: no and yes. He couldn't overtake Woods this week, but likely would go to No. 1 over the next few weeks if neither played.

Scott had reason to be mildly surprised by this round. For one thing, he had not been to Bay Hill in five years. Scott typically plays Innisbrook, but decided to mix it up. And he does have some experience on the bag. His caddie is Steve Williams, who worked for Woods in six of the eight Bay Hill wins.

Even more surprising, though, is that Scott said he was coping with flu-like symptoms, and still doesn't feel completely healthy.

''It's hard to say that I'm sick,'' Scott said with a smile. ''I feel actually better now than when I woke up. Just a bit under the weather. I can't complain.''

Scott is a believer in the adage, ''Beware the injured golfer.'' He lowered his expectations, concerned himself only with the next shot and was more concerned with his energy than feeling any nerves.

He also missed an 8-footer for birdie on No. 8, and he picked up his lone bogey by missing the 18th green well to the left.

It was the sixth time Scott has had a 62 on the PGA Tour, the most recent in 2011 at Firestone the year he won. But he didn't want to look at it as anything more than just a great start, especially with half of the field still to play in the afternoon.

''Hopefully, with a solid round tomorrow I keep myself right in this golf tournament,'' he said. ''Like at any event, you want to start and put yourself right in it from the get-go and I've done that here.''

DIVOTS: Bubba Watson hit three tee shot into the water on the par-5 sixth and made an 11. He shot 83 and withdrew. ... Snedeker had not broken 70 in the first round all year until Thursday. ... Pat Perez opened with a 70, ending his streak of nine straight tournaments in which he shot in the 60s the first round.