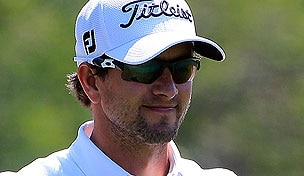 DUBLIN, Ohio – Adam Scott was in the middle of all the chaos in South Africa as darkness gathered.

Tiger Woods and Ernie Els, in a sudden-death playoff to decide the 2003 Presidents Cup, halved three straight holes and could barely see the last two putts fall. Both teams and captains were on the second green at Fancourt when a tie was proposed. That's when U.S. captain Jack Nicklaus reminded International captain Gary Player that the Americans would retain the cup as the defending champion.

He was 23, two months removed from his first PGA Tour win. It was his first Presidents Cup. The burst of emotion got the attention of his teammates. The teams eventually agreed to share the cup. Scott would not have guessed it would be as close as he would get to being on a winning team at the Presidents Cup.

The 10th edition of the Presidents Cup starts Thursday, and the odds do not exactly favor the International team.

It has seven rookies, and while all but Hideki Matsuyama have played a fair amount on the PGA Tour this year, Scott is the only team member to have won – at the Masters for his first major, and The Barclays during the FedEx Cup playoffs.

The American team is regarded as one of the strongest ever for any cup – all 12 players are among the top 30 in the world ranking, and four other players from the top 30 were left out (Jim Furyk, Dustin Johnson, Nick Watney and Bubba Watson).

The matches are at Muirfield Village, were Tiger Woods has won five times and Matt Kuchar won in June. The Americans have never lost the Presidents Cup on home soil, which is not all that unusual considering they have only lost once since the Presidents Cup began in 1994.

''I understand that and how it looks on paper,'' Scott said Wednesday after the final day of practice. ''It's hard to write off guys who are top 60 in the world, because on any given day, anyone can beat anyone. And we've seen that a million times, especially in 18-hole match play. Yeah, I see how that looks. I also see seven guys here for the first time pumped up and ready to go. And I think that's giving me a great feeling about a new experience in the Presidents Cup after having a run of really big defeats.''

The Presidents Cup gets started with Jason Day and Graham DeLaet taking on Hunter Mahan and Brandt Snedeker in the first of six fourballs matches. It's the first time since 1996 that the better-ball format has been used in the opening session.

Scott is taking the youngest player on the International team – 21-year-old Matsuyama – as his partner against Bill Haas and Webb Simpson. Phil Mickelson and Keegan Bradley, undefeated in three matches last year at the Ryder Cup, take on Louis Oosthuizen and Charl Schwartzel.

International captain Nick Price made sure a veteran played with a rookie, except with seven newcomers, he had no choice but to put two rookies together – Branden Grace and Richard Sterne in the anchor match against Zach Johnson and Jason Dufner.

Els is the veteran of this International team, especially with five other players from southern Africa. But when the younger players talk about the week and the importance of winning, Scott's name always gets mentioned.

Perhaps a green jacket can make the voice a little stronger.

''Scotty is really determined,'' said Marc Leishman, who will partner Angel Cabrera against Woods and Kuchar. ''He has not been on a winning side. Ernie has been vocal, as well; Angel, too. All the experienced guys are really motivated and determined to win. Think they are getting sick of being on the wrong end of this competition.''

“It's getting to the point where ''competition'' might be a little strong. The last three President Cups have been a rout.

''I feel it's really important for the Internationals to get a win,'' Scott said. ''We need to make this thing really relevant, make it a real competition, because it's gotten a big lopsided the last few outings. I think we've got a team that can win this week, but the only way we can do it is by playing good and wanting it more than the Americans. The last few days have been about building our spirit and our feeling to that point where we want to get out there tomorrow and want it badly.''

The Americans have never trailed after any session dating to Sunday singles in 2005.

''The guys who have not been here want to start on the right foot,'' Scott said. ''And the guys who have played in several ... want to turn this around and get a win. And so I think everyone is coming in very determined to put ourselves in front and try and win as many sessions as we can.''