Scott ready to get season started 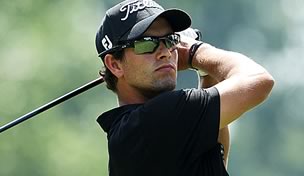 LOS ANGELES - Adam Scott was on the range at Riviera on Tuesday and had every reason to feel like a stranger. He is the only player from the top 10 in the world who has yet to play a tournament this year.

“I may have to introduce myself to a fair bit of people,” Scott said.

Waiting until the Northern Trust Open to begin his 2012 season was only partially by design. Scott had planned to be at Kapalua for the PGA Tour opener, but he had his tonsils taken out in December. He said the recovery time for an adult is about three weeks.

Scott said he had tonsillitis at least five times a year for the last couple of seasons, and when it happened at the Deutsche Bank Championships - he was tied for the lead through 36 holes - that was the last straw.

The three-month break was the longest of his career, and it was the first time in 10 years Scott has spent so much time at home in Australia. It allowed him to get his mind off golf, and it made him eager to return.

“I’m really ready to play, and that’s important, too,” Scott said. “I’ve been starved of tournament golf at the moment.”

The majors were also behind his late start to the year.

Scott has not performed well in the biggest events throughout his career as he tried to find the right schedule leading up to the majors. He might have found something a year ago, when he was runner-up at the Masters and finished seventh in the PGA Championship. It was only the second time he had two top 10s in the majors in one year.

Scott will play the Match Play Championship, Doral and then take part in the Tavistock Cup. That means he will play three tournaments and a 36-hole made-for-TV exhibition before going to the first major.

But it worked last year.

“Look, I’ve tried so many different things trying to get myself in the best shape for the biggest events, and until last year, I didn’t play very good in the biggest events,” he said. “Last year I changed it up and took my time getting ready properly, and I had a good result. It worked last year. I have to try to do something similar.”

Scott also hopes the late start will keep him fresh at the end. Despite a solid season, he felt flat when the FedEx Cup playoffs began.

RANKING SEPARATION: Yani Tseng is the defending champion for the first of six times on the LPGA this year (State Farm is no longer on the schedule) at the Honda LPGA Thailand. And while wins are the best barometer, the women’s world ranking also shows what kind of season Tseng had in 2011.

At this time a year ago, Tseng was No. 1 in the world with an average of 10.34 points. It was so close at the top that four players - Jiyai Shin, Suzann Pettersen, Cristie Kerr and Na Yeon Choi - were within one point of replacing her.

Tseng returns to Thailand with an average of 15.81, while Pettersen remains No. 2 at 9.0 points. The difference between Tseng and Pettersen is equal to the gap between Pettersen and Karen Stupples at No. 61.

NO RESPECT: Riviera is getting a reputation of not showing much respect to its past champions.

Players were stunned last week to learn that the Northern Trust Open rejected Mike Weir’s request for a sponsor’s exemption. Not only is Weir a former Masters champion, he won back-to-back in Riviera within the last decade. Weir rallied from seven shots behind on the last day to win in 2003, then won in 2004 to become only the sixth repeat champion.

The exemptions instead went to Fred Couples, K.T. Kim, Jason Gore, UCLA sophomore Patrick Cantlay and Texas freshman Jordan Spieth. It was the exemption to Spieth that raised eyebrows. He has made the cut in the Byron Nelson Championship (a hometown course) the last two years, but has no connection to Los Angeles.

Weir, trying to make his way back from elbow surgery, said he was surprised by the decision, but chose to leave it at that.

It’s reminiscent of the time Robert Allenby was trying to register in 2002 as the defending champion. He hit a 3-wood in a cold, driving rain to 5 feet to win a six-man playoff, a shot worthy of a plaque that isn’t there.

He was asked for his credentials. Allenby showed them, and the person registering still couldn’t find his name. Exasperated, Allenby turned to a large photo on the wall showing him posing with the trophy and said, “That’s me.”

COMEBACK GROUP: The PGA Tour massages the groups for the opening two rounds of tournaments to provide story lines, and it wasn’t too hard to figure out one such group for the Northern Trust Open.

Phil Mickelson, Kyle Stanley and Brandt Snedeker, three players who had very little in common until they all rallied from at least six shots to win tournaments over the last three weeks.

Mickelson was six shots behind Charlie Wi at Pebble Beach; Stanley came from eight shots behind Spencer Levin in the Phoenix Open; and Snedeker rallied from seven shots behind to beat Stanley at Torrey Pines.

It’s most fitting that Stanley is in the same group as Mickelson.

He was practicing at Whisper Rock on Wednesday of the Phoenix Open, just three days after the calamitous finish, when Mickelson approached to offer some advice.

“It wasn’t an organized meeting or anything,” Stanley said. “I had never met him before. He just told me to keep my head up, and how to approach it the next time I have a big lead, how to stay aggressive. It was pretty classy.”

DIVOTS: British Open champion Darren Clarke has a new caddie. He has hired Phil “Wobbly” Morbey on a temporary basis to try to shake his run of bad results since winning at Royal St. George’s. … Jessica Korda became only the fifth player to win an LPGA Tour event at 18 or younger. … Tiger Woods and Phil Mickelson have each won 13 times on the PGA Tour in their native state of California. Woods won his 13 titles at Torrey Pines (seven), La Costa (three), Pebble Beach (two) and Harding Park (one). Mickelson won his at Torrey Pines (three), Riviera (two), PGA West (two), Pebble Beach (four) and La Costa (two). … In a change this year, while qualifying for the Match Play Championship has closed, the tournament will wait until next week’s world ranking to determine the seeds.

STAT OF THE WEEK: Four of the six winners on the European Tour were outside the top 100 in the world ranking.

FINAL WORD: “I want to knock on his door and say, `Can you be my friend and teach me to putt?”’ - Michelle Wie, on seeing Luke Donald at The Bear’s Club in Florida.