Slow play is bad, but what can be done? 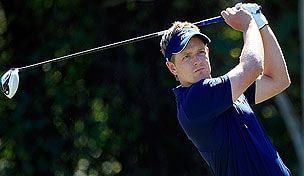 HONOLULU - Luke Donald took to Twitter to vent about a contentious issue on the PGA Tour. If nothing else, it was refreshing to see golf with a No. 1 player who was willing to express his opinion freely and publicly.

As for that issue that stirred Donald from his holiday in Barbados?

Pace of play: a topic that is not going anywhere in a hurry.

Players can question whether the tour should change the FedEx Cup points system. They can debate the merits of the world ranking. They can be disgusted with the number of no-shows for the Tournament of Champions at Kapalua. And a week from now, they might really get worked up when they hear details of a proposal to revamp Q-school.

Trouble is, no one has a reasonable solution.

Donald joined the fray during the final round at Kapalua, where the final four pairings featured Kevin Na, Ben Crane, Webb Simpson and Jonathan Byrd, none of them part of Lanny Wadkins dream foursome if speed were a factor.

It didnt take long for Byrd and Steve Stricker to fall nearly two holes behind.

Sounds like slow play is already an issue 1st week of the (at)PGATOUR season and its 2 somes. Sort it out please came the first tweet from Donald. He followed with some advice: Its not that hard, be ready when its your turn. Slow play is killing our sport.

Two tweets later, Donald got off his soap box with a final thought: I could rant all day long, dont think anything will ever change as the slow players dont realize they are slow.

Criticism is less meaningful when not accompanied by solutions, and there is no simple answer for slow play. If there were, it would have been fixed when Nixon occupied the White House.

Nonetheless, a few observations from the last month.

' Tim Herron took about two minutes to figure out how to play his second shot to the green on Friday of the Sony Open in Hawaii. His ball was in the rough, 187 yards to a flag tucked behind the bunker. Was the ball going to take off on him from that lie? How much? 6-iron or 7-iron? If it had been in the fairway, caddie Lance Ten Broeck told him it would be a smooth 6-iron. Aim at the corner of the trap and cut it back toward the flag? Play for the middle of the green?

The entire conversation took place while the group ahead was putting. As soon as the group left the green, Herrons shot was in the air. Thats how golf is meant to be played. Beautiful.

' It would be simple to blame the swing coach or mental gurus who preach the importance of routines, which are fine as long as they dont take too long. Regardless, it still comes down to a player not wanting to hit until he is comfortable over the shot.

Think of it this way: How much damage could Tom Brady do if he stood behind center as long as he wanted, not having the ball snapped until he felt everything was in place? The penalty is 5 yards in football. Should golf move players back 15 yards for every shot that takes them longer than 40 seconds? That would take even more time.

' This spring marks the 20-year anniversary of the last time a player was given a one-shot penalty for pace of play. To change the policy and make it a one-shot penalty when a player is over his allotted time sounds simple but wouldnt work. There are too many extenuating circumstances. Golf doesnt have many gray areas; this would be loaded with them.

Until someone gets a penalty shot, the stiffest punishment starts with a $20,000 fine for the 10th time a player is part of a group that gets put on the clock. Yawn. How about docking him 50 points from the FedEx Cup standings? Consider that a year ago, 50 points marked the difference between 125th (and qualifying for the playoffs) and 143rd (and getting a month off).

' Consider the lay of the land. Tour officials allotted 4 hours, 15 minutes for a twosome at Kapalua, built on a mountain with full-size SUVs used for shuttles between two holes. The final twosome at the Sony Open played in 3 hours, 39 minutes. Waialae is old school - flat, with tees next to the greens.

' Television cannot be underestimated when it comes to slow play.

It would seem that TV could at least draw attention from the pace by not showing a player until he is ready to pull the trigger. Two problems:

One, a number of players have perfected the art of backing off shots. Again. And again.

Furthermore, the beauty of television is spending time with the player before the shot, allowing the fan to anticipate the possibilities. It worked well when Nick Faldo took forever before deciding on a 2-iron to go for the 13th green, a key moment when he won the 1996 Masters. Padraig Harrington walking up to the 17th green to check the hole location at Brookline in the Ryder Cup? Not so much.

Heres the bigger issue with TV. Mark Russell, one of the chief rules officials, showed off his atomic watch at Sherwood last month. The seconds were ticking toward 6 p.m. EST, just as the last group on the last green was tapping in. The timing was perfect.

The next day? Not so much.

Despite being in twosomes, play took much longer because of a strong wind. That leads to more time in club selection and on the green. Yet tee times were left alone, thus the third round went well past four hours and the 6 p.m. finish time on NBC Sports.

That wasnt an accident.

The tour purposely wanted to go long on Saturday so that NBC could direct viewers to Golf Channel for the conclusion of the third round. It was another example of NBC Sports trying to help boost the visibility of Golf Channel now that both are owned by Comcast. Is that a bad thing? Not necessarily. Especially not when TV foots so much of the bill.

' Slow play at public courses has been attributed to amateurs trying to be like the pros. Maybe so. Russell made an observation about recreational golf years ago that is worth considering: Slow play is only a problem when you have to wait.