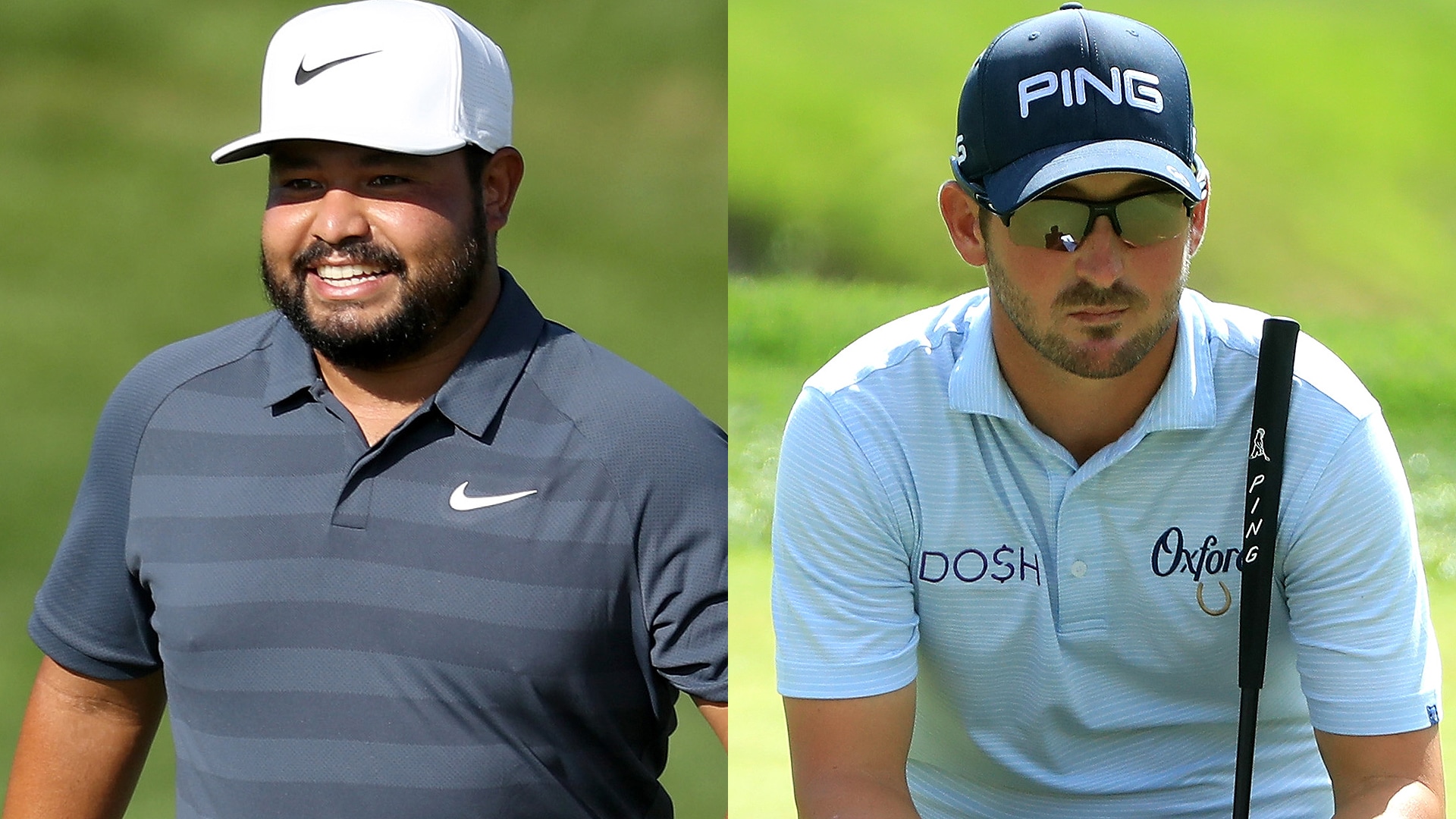 POTOMAC, Md. - The guy who has been fiddling with putters because he wasn't happy with the results finally saw his share of putts go in.

If only Tiger Woods could have looked behind him, he might have seen J.J. Spaun match his best score of the year with a 7-under 63 to share the lead with Andrew Landry in the Quicken Loans National.

Spaun, who has gone back-and-forth with putters four times in his last six tournaments, quietly went about his business Thursday while most of the attention was on Woods in the group ahead of him using a mallet-style putter to help him shake out of a slump.

A new putter gave Woods a better feel, but the same middling results. He had six birdie chances from 10 feet or closer and made two of them to offset a double bogey early in his round, and he had to settle for an even-par 70.

''I shot about the score I should have shot today,'' Woods said.

Landry shot his 63 in the morning when the TPC Potomac at Avenel Farm was soft, though still punishing with its thick rough. Spaun did his work in the windier afternoon, even if no one noticed. He played in the group behind Woods, and didn't even get leftovers from thousands of fans watching golf's biggest draw.

''Hell, no,'' Spaun said with a laugh. ''They don't even know who I am. They played so fast, actually. They were a solid hole ahead of us. ... I was kind of nervous, but I was more excited. I was like, 'Oh, I'm going to get to see his second shots from looking back from the tee.' But they played so fast, I didn't even see him at all. I just saw his pink shirt way in the distance.''

He would have seen solid play early, some wild shots off the tee by Woods in the middle and flawless work from tee-to-green late.

Spaun wouldn't have seen many putts go in.

Woods had five straight birdie chances from 8 feet or closer on the back nine. He made two of them - one of them from 3 feet - and didn't make a putt longer than 10 feet the entire round. Woods kept the round from getting away from him with two big par saves to start the back nine, both times having to chop it back to the fairway. He got up and down from 147 yards on No. 11 by making a 6-foot putt.

It was the first competitive round for Woods on the TPC Potomac, and his first time playing the tournament since 2015. This also is the last edition, and the field is among the weakest this year on the PGA Tour. Rickie Fowler is the only player in the top 10 in the world, and he also rallied for a 70.

Even when he kept it in the short grass off the tee, Woods didn't have a reasonable birdie chance until No. 5, and he missed from 10 feet.

And then he ran into trouble on the par-4 sixth, starting with a tee shot he pulled left that caromed off a tree and landed in the mown path that leads from the tee to the fairway. Woods tried to hit a 3-wood to the green and it came up short and into the hazard. He had to drop it in more rough, came up just short of the green and wound up making a 4-foot putt to escape with double bogey.

Going with an iron off the tee at the par-5 10th, he pulled that into the hazard but at least was able to chop it back to the fairway, rip a fairway metal around the green and chip it close to save par. On the next hole, he blasted a tee shot well right, over the gallery, and had to pitch out back into play again. That par felt like a birdie.

''That kept the momentum somewhat on my side,'' Woods said. ''I knew I had some birdie holes coming up to try to get back to under par for the day, and I was close.''

The course was the fourth-toughest on the PGA Tour last year, trailing only three majors, though it was soft enough and the wind was mild so that low scores were available. Kyle Stanley won at 7-under 273 last year. Landry and Spaun shared the lead at 7 under after one round.

''I expect that if we don't get any rain the next few days, the course is going to firm up, greens get firm, get a little bit quicker, but it's not going to be like last year,'' Billy Horschel said after his 64. ''So you're going to have to go out with the mindset that it's a little bit different course, you can't be as conservative, you've got to still try and make birdies.''

Andrew Putnam also was at 64 while playing in the afternoon. Beau Hossler and Abraham Ancer were another shot behind.

Woods has been at least six shots behind - and no better than a tie for 29th - after the opening round of his last six tournaments dating to the Masters.

Doug Ferguson is the national golf writer for The Associated Press.