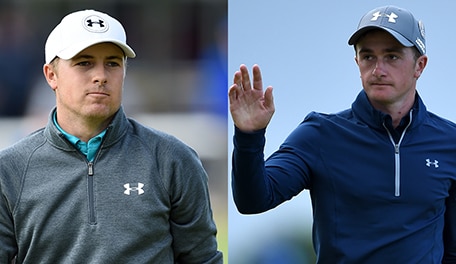 ST. ANDREWS, Scotland - Jordan Spieth was one shot out of the lead and one round away from the third leg of the Grand Slam. Not since Bobby Jones has an amateur won the Open Championship, and then along came Paul Dunne with a bogey-free performance Sunday at St. Andrews that gave him a share of the lead.

When a shootout at St. Andrews ended Sunday, 14 players were separated by three shots. Half of them were major champions.

Even for a place packed with centuries of history, this Open offered endless possibilities.

Dunne, the 22-year-old from Ireland, was impervious to everything around him and soaked up a day he won't soon forget in his round of 6-under 66. Louis Oosthuizen, the last player to lift the claret jug on the Old Course in 2010, made three birdies over his last five holes for a 67. Jason Day had a share of the 54-hole lead for the second straight major with a 67, and this time he doesn't have to worry about vertigo symptoms he dealt with at the U.S. Open.

''It's surreal I'm leading the Open, but I can easily believe that I shot the three scores that I shot,'' Dunne said. ''If we were playing an amateur event here, I wouldn't be too surprised by the scores I shot. It's just lucky that it happens to be in the biggest event in the world.

Such an opportunity might not come around again for Spieth. Only three other players won the first two legs of the Grand Slam since the modern version began in 1960. Arnold Palmer, Jack Nicklaus and Tiger Woods only got one shot at it, and none ever started the final round so close to the lead.

And so it was Spieth, a 21-year-old Texan with an uncanny sense of occasion, who brought the gray, old town to life in a mixture of sunshine and rain.

After punching his golf bag in frustration at the turn, he ran off three straight birdies on the back nine and kept alive his hopes of becoming the first player to sweep the four professional majors in one year. He finished with a 66.

Ben Hogan in 1953 was the only other player to win the Masters, U.S. Open and British Open in the same year.

''I'm going to play to win,'' Spieth said. ''I'm not playing for a place. I don't want to place third tomorrow. I want to win. And so I'm going to play my game - to stay in the mix if it's not all there at the beginning, and if it is, I'm going to continue to play that way to try and get out in front. It's going to be hard.''

Rarely has the Old Course been as easy as it was Sunday.

One day after raging wind off the Eden Estuary caused a 10-hour delay and forced a Monday finish, the flags were soaked from passing showers and limp from no wind. Marc Leishman flirted with a record-tying 63 until he made par on the closing hole. It still got him with two shots of the lead. The leaderboards were loaded with birdies, and seven players had at least a share of the lead at some point in the third round.

That's what made Dustin Johnson's collapse so shocking. With a one-shot lead after powering his way around St. Andrews for 36 holes, he was the last player in the field to make a birdie, and that wasn't until the 15th hole. He followed with three straight bogeys for a 75 to fall five shots behind.

That might not seem impossible to make up, though having 17 players ahead of him - Spieth included - makes it a tall order.

Spieth, the youngest professional in the field, seemed calm despite the historic moment in front of him.

His goal at the start of the week was to treat the Open like any other tournament he was trying to win. Even during the long delay on Saturday, he said he hasn't thought much about the slam. There is no escaping it now, and Spieth doesn't see that as a problem.

''If I have a chance coming down the stretch, if it creeps in, I'll embrace it,'' he said. ''I'll embrace the opportunity that presents itself. As far as handling it, I don't look at it as a negative thing. I look at it almost as an advantage. Why should it add more pressure in a negative way?

''If it adds more pressure, it just makes me feel like this is something that's a little more special,'' he said. ''Let's go ahead and get the job done.''

This will be his toughest challenge. He won the Masters in a runaway. He was part of a four-way tie for the lead at Chambers Bay and outlasted Johnson and Oosthuizen over the final hour. Now he's starting a race against an extremely crowded field.

Padraig Harrington, a three-time major champion, revived his game with a 65 and was two shots behind. The nine players at 9-under 207 included Sergio Garcia and Justin Rose, Retief Goosen and Adam Scott, and one other amateur - Jordan Niebrugge of Oklahoma State, who shot a 67.