Stanley coming to grips with meltdown at Torrey 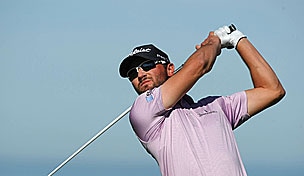 JACKSONVILLE, Fla. - American golfer Robert Garrigus didnt see any reason to stick around for the finish.

He had watched enough of the final round at Torrey Pines to see that Kyle Stanley, whom he described as exploding with talent, had a three-shot lead and headed for a sure win. Garrigus left for the spa to get a massage.

It didnt take long for him to figure out what had happened.

I got back to my car, saw my phone, and it was blowing up, Garrigus said. I had six or seven text messages. I had four or five voicemails. I wasnt talking to anyone on Sunday, so there was no need for anyone to call me.

I looked at my phone and thought, Uh-oh. He blew it, Garrigus said Monday evening.

Among his priorities this week at the Phoenix Open was to find Stanley and offer the kind of advice that only comes through experience.

Garrigus has every bit of that.

He had a three-shot lead on the final hole of the 2010 St. Jude Classic when he smothered his tee shot into the water, took a drop, then tried to go at the green not realizing the size of his lead. He went left of the water into the trees and eventually made triple bogey. He lost in a three-man playoff.

Stanley can relate only to the triple bogey, the water and a playoff.

He did everything right on the final hole of the Farmers Insurance Open, even taking a sand wedge instead of a lob wedge for his third shot over the pond to a hole location in a bowl at the front of the green. What happened next surprises him still. His shot landed behind the hole and raced off the front of the green and into the water.

After a drop into the first cut to eliminate even more spin, he landed his shot on the top shelf and three-putted for triple bogey. On the second playoff hole, he missed a five-foot par putt and watched Brandt Snedeker pose with a trophy that should have been his.

Stanley was still in shock when he faced the media. His eyes were glassy with tears. His lip quivered. He answered every question, even if he had to stop at times to compose himself. Looking back, he realizes that was part of the healing.

I tend to wear my emotions on my sleeve a little bit, Stanley said Tuesday at the Phoenix Open, where he agreed to another interview to help put his collapse behind him. It was very tough to swallow. But one of the things I learned is I think you need to really be prepared for whatever this game can throw at you.

Its a crazy game, he said. It can love you; it can hate you.

Stanley, like Garrigus, was going for his first PGA Tour victory. Both grew up in the Pacific Northwest. Both are in the top class of power players in golf. The similarities end there.

Stanley, who grew up in the Seattle area, was an All-American at Clemson who played in the Walker Cup. He is in his second full season on the PGA Tour, so naturally skilled and polished that his long-term outlook is better than some of the rookies who won last year.

Garrigus, from Oregon, didnt have the grades to get a serious scholarship offer. He spent two years at junior college before hitting the mini-tours. Then his career was nearly derailed with drug and alcohol addiction that put him in a 30-day clinic. He remains an open book, which reads like a comedy given his self-deprecating sense of humor.

It was a lot easier for me, Garrigus said. I think the personality I had made it easier to deal with. Its just golf. I dont know if he thinks of it that way. I want to reach out and talk to him. I dont know if he wants to hear what I have to say, and I dont care. Hes a good kid, and I dont want him to get shook up over it.

Stanley appears to be well on his way.

His family was with him Sunday night, along with a close friend and his agent. He managed to eat. The sun came up the next day. He just signed up for Twitter a few months ago and picked up about 4,000 followers in 24 hours, those who felt badly for him or were impressed how he handled himself in defeat.

He received text messages from Steve Stricker, who beat Stanley with a birdie-birdie finish at the John Deere Classic last summer, and from Gonzaga basketball coach Mark Few, whom he doesnt even know personally.

Thats why I thought that was so cool, Stanley said. Ive been watching Gonzaga play basketball since I was 3 feet tall. I live and die with every game they play. I try not to miss any of them. So that was real special to hear from him.

The other messages, including a phone conversation with Zach Johnson, were equally meaningful.

I know I may not have believed it on Sunday night, or even Monday morning, but everybody just kept telling me Ill be a lot stronger for it, and I agree with that. I will.

Garrigus bounced back from that Memphis meltdown by winning the final PGA Tour event of the year at Disney. Stanley recalls watching Rory McIlroys collapse at the Masters last year'and how graciously he faced the press after an 80'and quickly pointed out that McIlroy was a U.S. Open champion two months later.

He believes something good is coming his way, and although the support has been overwhelming at times, Stanley is not interested in dwelling on Sunday at Torrey Pines.

After taking the 36-hole lead at Torrey Pines, Stanley was asked what appealed to him about golf when he first got hooked. It was the independence of the game, that he alone determined his success, and he alone had to cope with his failures.

That figures to serve him well.

Theres not much anyone can say at the time to make you feel better, he said. Its just kind of a gut check. Ive got to dig deep. And out of this whole process, Im going to figure out a lot about myself.