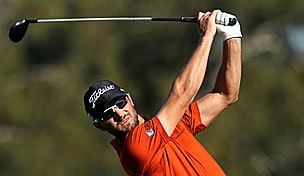 SAN DIEGO - Hang gliders were taking off from the cliffs behind the 13th tee at Torrey Pines, where Kyle Stanley was waiting to tee off on the 524-yard hole. Then, the 24-year-old launched a shot that was just as majestic.

Wait `til to you see where this one went, caddie Brett Waldman said.

On another clear day along the Pacific coast, it was hard not to notice.

In a familiar performance'even if the name might not be all that familiar now'Stanley overpowered the South Course on Saturday on his way to a 4-under 68 that gave him a five-shot lead going into the final round at the Farmers Insurance Open.

For some reason, Ive always been long, said Stanley, who has a slight but athletic build and generates enormous speed. But if you take a golf course like this where youre hitting 7-irons into par 5s and short irons into long par 4s, it definitely helps.

It never hurt Tiger Woods, a seven-time winner as a pro at Torrey Pines.

Stanley chose to lay up on the par-5 18th with the large pond in front and spun a wedge near the hole to about four feet. About his only regret in the third round was missing that putt. One last birdie would have broken the 54-hole tournament record that Woods set in 1998, before Rees Jones beefed up the South Course to 7,698 yards for the 2008 U.S. Open.

Stanley grew up outside Seattle when Woods ruled the sport. All through his school, he kept a poster of Woods over his bed.

I think hes definitely influenced me and a lot of other people, too, Stanley said.

He gladly settled for a spot alongside Woods in the record book at 18-under 198 and a five-shot lead over John Huh and John Rollins as he goes after his first PGA Tour title.

Stanley cant recall ever having a lead this large, which can be troublesome if looked upon as only an opportunity to fail.

I think the biggest thing is you cant necessarily go out there and try to protect it, Stanley said. Youve got to really just keep doing what got you to this point. Im not going to be any more conservative tomorrow. Ill stick to my game plan off the tee and hopefully just continue to give myself a lot of chances.

He hit driver on all but three holes, and four of them traveled at least 320 yards, a big number considering Torrey Pines is just a cliff over sea level, and even in pleasant weather, the ball doesnt go quite as far as summer in Ohio.

Big numbers are nothing new for Stanley, however.

He recalls coming down to the Titleist Performance Institute when he was a 17-year-old in his senior year in high school. His ball speed was measured at 184 mph.

It wasnt just the big drives. Stanley showed exquisite control of his irons, especially his distance, and he has been working overtime the last few years on dialing in his wedges from inside 120 yards.

Even so, he refused to look ahead to Sunday and what a win might mean'a trip to the Masters, perhaps a spot in the World Golf Championships, a two-year exemption.

No one was giving him the trophy, either.

If a guy had a 10 or 12-shot lead, youd feel pretty comfortable, Rollins said after his 68. But when youre four or five shots, sometimes its hard to play with a big lead because you get kind of relaxed and everything else.

Rollins should know. He had a three-shot lead with five holes to play in 2009, losing to Nick Watney.

Still, Stanley, the former All-American from Clemson, aspires to play boring golf and not look too far ahead.

His lone bogey came on the 12th, when he went just over the green, chipped to 6 feet and missed the putt. Then came the big blast on the 13th'As good as I can possibly hit it, he said'that left him a soft 7-iron to 15 feet on the fringe below the hole for an easy birdie.

Are you playing this as a par 4? Sang-Moon Bae turned and said to him with a smile.

Huh, a 21-year-old rookie who spent three years on the Korean Tour, also had a 68 and joined Rollins at 13-under 203. FedEx Cup champion

Bill Haas (70) and Bae (72) were another shot behind. Bae was 5 over through five holes until he ran off four straight birdies to start the back nine to get his name back on the leader board.

The question is whether anyone else is in contention.

Stanley is no surprise to those who play with him or watch him hit balls, and he nearly joined the parade of rookie winners last year until Steve Stricker rallied with birdies on the last two holes to beat him in the John Deere Classic.

Stanley had a one-shot lead over Brandt Snedeker going into the third round at Torrey Pines and before long had a comfortable lead, just as Woods has done on this public course.

From deep rough on the par-5 sixth, Stanley hammered a shot just short of the green and pitched up to 12 feet for birdie. He hit sand wedge to 10 feet on the 10th for another birdie, then established himself on the back nine.

Along with the easy birdie on the 13th, Stanley saved par on the 14th. The day before, his approach jumped out of the rough and over the green for a double bogey. Playing it safe this time, he hit a 9-iron that went well short, into the bunker but blasted out to 8 feet and made a tricky, downhill putt for par.

Snedeker went to tap in a two-foot par putt on the seventh and was shocked when it made a horseshoe around the cup. He then missed his next five greens in regulation, and when he got home in two on the 13th, he three-putted. Snedeker had a 74 and fell seven behind.

This is something you dream about as a kid, Stanley said. But theres still one more round.

DIVOTS: Jay Don Blake in 1991 was the last player to make Torrey Pines his first PGA Tour victory. Ryo Ishikawa had his third consecutive round of 69 and was tied for 11th. Jonas Blixt had the low round Saturday at 65. Under a University of Farmers campaign, that was worth a $20,000 donation to his alma mater, Florida State. Cameron Tringale (Georgia Tech) had a 66 to finish second, which was worth $10,000.