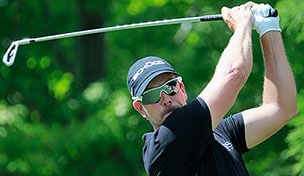 ATLANTA – Henrik Stenson capped off the best stretch of his career Sunday with the biggest payoff in golf.

Stenson held off a brief challenge by 20-year-old Jordan Spieth and closed with a 2-under 68 to win the Tour Championship by three shots over Spieth and Steve Stricker. The 37-year-old Swede also captured the FedEx Cup and its $10 million bonus. Stenson earned $1.44 million for winning the tournament.

Stenson, who two years ago was outside the top 200, moved to No. 4 in the world.

Spieth left one lasting impression on his remarkable rookie season. The youngest player in Tour Championship history ran off four straight birdies on the back nine at East Lake and pulled within one shot of Stenson with his 10-footer on the 16th.

Spieth caught a buried lie in the bunker short of the 17th green and made bogey, while Stenson steadied himself with an 8-foot birdie on the par-5 15th to return his lead to three shots. Stenson only made it easy at the end with three pars - nearly holing out from the bunker right of the 16th green, hitting a scary shot from the right fairway bunker on the 17th to the middle of the green, and saving par from another bunker on the 18th.

Stenson, who finished at 13-under 267, became the first European to win the Tour Championship and the FedEx Cup.

His amazing summer began with a tie for third in the Scottish Open. Stenson followed with a runner-up at the British Open and the World Golf Championship at Firestone, third place at the PGA Championship and a win at the Deutsche Bank Championship.

The Tour Championship was his second win in three tournaments of the FedEx Cup playoffs.

''Since the Scottish Open, it's been just an incredible run,'' he said. ''I'm speechless. It was a tough day out there. To hang in there the way I did, I'm really satisfied. ... It hasn't quite sunk in yet. I had to fight hard mentally to keep all this aside, and I managed to do that. It's going to feel better as the week goes on. I'm pretty sure about that.''

Tiger Woods, the No. 1 seed going into the Tour Championship, never recovered from his 73-71 start. He closed with a 67 to tie for 22nd, his worst finish ever at East Lake, and wound up second in the FedEx Cup. That still was worth a $3 million bonus.

Woods wrapped up the PGA of America's points-based award for player of the year, and he captured the PGA Tour money title and the Vardon Trophy for the lowest adjusted scoring title. Next up is a vote of the players for PGA Tour player of the year. He is the heavy favorite with five wins this year.

The award is to be announced on Friday.

Stricker had birdie chances on the last two holes, unaware that making one of them would have been worth an extra $1 million. He only cared about winning the tournament, knowing he needed birdies and for Stenson to make a mistake.

''I knew the putt meant a lot. I didn't know it meant that much,'' he said with a smile.

Instead of finishing second in the FedEx Cup, Stricker had to settle for third and the $2 million bonus.

Spieth had a 55-foot birdie putt across the 18th green that stopped inches away. His season was simply remarkable. The young Texan started the year with no status on any tour, and wound up with a win, more than $3.8 million in earnings and a trip to the Presidents Cup in two weeks.

''Henrik obviously was playing phenomenal golf,'' Spieth said. ''I felt like once a few putts started falling, we have a shot at it.''

Stenson became the fifth player to win his debut at the Tour Championship, a list that starts with Tom Watson when the elite 30-man field began in 1987. He also became the first player to go wire-to-wire without ties since Watson.

For much of the day, no one got closer to Stenson than three shots, and he answered that early challenge with an 8-iron to an elevated green at No. 7 to 2 feet for birdie. The Tour Championship came to life in the final hour, though, thanks to the youngest player in the field.

Fearless as ever, Spieth began a run of birdies starting on the 13th hole that not only moved him into second place, it put pressure on Stenson not to drop any shots. Stenson's only bogey came on the 14th, when he caught a flyer over the green and missed a 20-foot putt.

Spieth was between clubs on the 17th, however, tried to hammer a 9-iron and caught just enough heavy that it plugged in the bunker.

The next challenge came from Stricker, who rolled in an eagle putt on the 15th to get within two shots. He never got any closer.

Webb Simpson had the low round of the tournament with a 63 to finish fourth.