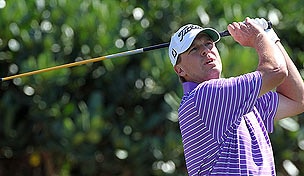 KAPALUA, Hawaii – Steve Stricker reached his boiling point Sunday in the Tournament of Champions when he walked off the 12th tee, his lead down to two shots and his ball in a bunker after he missed a fairway almost as wide as Wisconsin.

As he reached a clump of trees that shielded him from the fans, he thumped his 3-wood on the soft grass.

For the mild Midwesterner, this constitutes a meltdown.

“I was frustrated at that point,” Stricker said.

But he never lost his patience. More importantly, he never lost his lead. Stricker closed with four straight birdies, including a chip-in from short of the 16th green, for a 4-under 69 that restored the five-shot lead he started with in the third round at Kapalua.

It only looked as though nothing had changed.

Defending champion Jonathan Byrd had a 4-foot birdie putt on the 16th hole for a share of the lead. He missed it and had to settle for two more pars and a 67.

Webb Simpson had long birdie putts on the 13th and 14th holes to catch Stricker. He missed both of those and was left in the wake of Stricker’s great finish.

Stricker was at 19-under 200, poised to start the new season off with a trophy in his hands and a lei around his neck.

Only two other players have led by as many as five shots through 54 holes at Kapalua – Geoff Ogilvy in 2009 and David Duval in 1999 – and both went on to win handily. Stricker doesn’t expect it to be that easy.

He will play in the final group with Byrd, who overcame back-to-back bogeys early in his round for a 67. Byrd would have taken a spot in the last group at the start of the week. Five shots behind the highest-ranked American in the field?

“I don’t know what it will take, but I’m guessing a minimum of 8 under probably,” Laird said of his chances Monday. “But this is a golf course that you can do it.”

Stricker showed that Saturday when he had a 10-under 63. As uncomfortable as he felt Sunday, such a score looked impossible.

“I wasn’t making any birdies, and it seemed like everybody else was,” Stricker said. “I knew it was going to be tough. When you’re leading a golf tournament, it’s just hard to keep that momentum. When you’re not making birdies, you feel like you’re letting things slip away. I felt everyone was coming after me, and I was coming back to the pack.”

But he owns the closing stretch on the Plantation Course.

With his four straight birdies at the end, Stricker is now 13 under par on the last five holes. This time, he started his birdie run on the par-5 15th with a 3-wood that he had to hit perfectly to get onto the green, and he did just that for a two-putt birdie.

He followed with a chip-in from short of the 16th green – “I stole one there,” Stricker said – then crushed a tee shot and hit 9-iron into about 4 feet on the 17th. With a 406-yard drive on the 18th – down the hill, down the grain, the wind at his back – he came up just short of the green for an easy birdie.

It’s the rest of the day that didn’t feel so easy.

“I didn’t feel comfortable,” Stricker said. “I didn’t hit it bad, but I didn’t feel as aggressive at times. You’re in a position where you don’t want to screw up, but yet you’re on a course that birdies can be made and guys can come from a ways back.”

The more pars Stricker made, the more he let other players back into the hunt.

Stricker began the third round with a five-shot lead over Simpson, and only five players were closer than 10 shots of him.

Byrd, despite consecutive bogeys early in the round that put him nine shots behind, began his rally with an eagle on the fifth hole. Laird made four birdies on the front nine and made the turn in 12 under.

After making a 20-foot birdie putt on the seventh, he ended his streak of 30 holes without a bogey with a three-putt on the eighth, missing badly from just over 3 1/2 feet.

Then on the par-5 ninth, his lob wedge came up woefully short and rolled back down to the fairway. Again, Stricker did well to scramble for par on a birdie hole.

Simpson birdied the eighth for a two-shot swing, then picked up birdies on the 10th and 12th to close within one shot.

But no one ever caught up to Stricker, and he pulled away in the final hour.

Stricker was on the 11th tee when Bryce Molder holed out from 75 yards for eagle on the 14th hole, a cheer that caused the final group to turn and look. That got Molder to within three shots of the lead. He wound up eight shots behind.

“Steve is certainly not one to back off the pedal, so you know there’s not a great chance he’s going to come back to the field a lot,” Molder said. “You’ve got to make some birdies. I saw that through nine, he was just playing OK. And I thought, `OK, well, cool. Now we’re within striking distance.’ But you know, so much can happen in so many holes.”

It happened just in time for Stricker.

Watch live coverage of the final round of the season-opening Hyundai Tournament of Champions on Golf Channel: Monday, 4-8 PM ET.