Stricker in place for Hawaii sweep 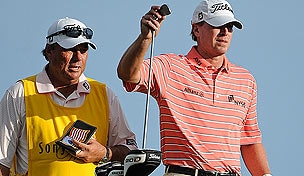 HONOLULU – Steve Stricker became a footnote in PGA Tour history by winning Comeback Player of the Year in consecutive seasons.

Coming back after a win? That’s been a little more difficult.

Three days after winning on Maui at the Tournament of Champions, Stricker was back to work. He did well Thursday in the Sony Open to open with a 4-under 66 and finish three shots behind Graham Delaet of Canada. What made it impressive is that Stricker felt as if he were in a daze part of the time at Waialae Country Club.

That’s nothing new. In the seven previous times that he played the week after winning, the best he could manage was a tie for ninth in the Deutsche Bank Championship in 2007.

He won the John Deere Classic the last three years, flew across the Atlantic for the British Open and has never been a factor. When he won the Northern Trust Open at Riviera in 2010, he headed over to Arizona for the Match Play Championship and became only the second No. 1 seed to lose in the opening round.

This week’s trip was only a short hop over from a different island, but it’s no less taxing.

“I’m still excited from last week,” Stricker said. “You turn around and you’re right back in the competition. You’ve got to be focused. And I was, for the most part.”

The Plantation Course at Kapalua is a big walk, and Stricker said he was even more drained from nearly losing five-shot leads on the last two days and fighting off the contenders. Winning itself always takes a toll, so Stricker took Tuesday off, then spent Wednesday in what he described as a pro-am that was cluttered with media requests, not to mention dozens of players stopping to congratulate him.

“It’s a nice problem to have,” he said

But he’s back to work, now, and in the first full-field event of the PGA Tour season, feels as though he at least gave himself a chance to join Ernie Els in 2003 as the only players to sweep the Hawaii tournaments.

Walking toward the clubhouse, Stricker was approached by Golf Channel and asked if he could come on the set for a few minutes. One of the producers said it wasn’t imperative, and Stricker – as if it were the hardest thing he ever did in his life – said no.

After changing shoes in the locker room, and speaking briefly with a PGA Tour media official to provide quotes for the Honolulu newspapers, he made a detour on his way to the hotel so he could do the Golf Channel interview.

There’s one big advantage coming off a win, however.

“When you can win, it just boosts that confidence level way up there today,” Stricker said.

DeLaet didn’t have reason for a lot of confidence considering he had not played in any PGA Tour event in nearly seven months. His excitement level was hard to match, though.

It was about this time a year ago when the Canadian’s lower back hurt so much that he had major surgery, in which part of a disk was shaved off to alleviate pressure on a nerve. He thought there might be a chance he would never play again, this right after a rookie season in 2010 in which he finished a respectable 100th on the money list to easily keep his card.

“I’m just so excited to be back out,” DeLaet said. “I had a good season my rookie campaign, and then it was all basically just taken away. And I realize now how fortunate we are to be playing golf for a living. My whole attitude is definitely better.”

Carl Pettersson and former Sony Open champion K.J. Choi were among those at 65, while Stricker was in the group at 66 with Webb Simpson and Bud Cauley.

Thursday was a gentle start of the season on the PGA Tour, with the ocean breeze barely strong enough to move fronds on the palm trees that line the fairways. Sixty-three players in the 144-man field broke par, including Oahu native Tadd Fujikawa, who was given a late sponsor exemption.

Cauley, who last year became the sixth player to go from college to the PGA Tour without Q-School, didn’t show any signs of rust from having not played in nearly two months. He ran off four consecutiveA birdies around the turn until he stalled, then dropped a shot on the 17th and missed a birdie opportunity on the 18th when he tried to hit fairway metal out of a bunker and topped his shot.

DeLaet’s injury was nothing new, first suffered when he was playing hockey as a junior. His lower back would give him fits, and then the pain would subside. Toward the end of his rookie season in 2010, however, it got so bad that he couldn’t sit for more than a few seconds.

Surgery took care of the pain, and DeLaet tried to return in the summer in the two tournaments sandwiched around the U.S. Open. His next start was supposed to be the AT&T National at Aronimink, but after playing a few holes before the Wednesday pro-am, he realized he was trying to get back too soon.

“I think I wanted to be there so bad that I felt that I was better physically than I actually was,” DeLaet said. “I just knew that it’s hard enough to compete out here when you’re healthy, and I just knew that I wasn’t in good enough shape to compete.”

For the moment, he feels great.