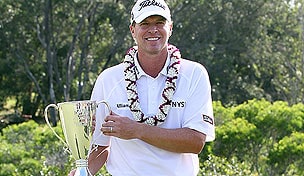 This wasn’t the kind he was thinking about.

No other player is more accustomed to building a big lead, blowing a big lead, and then settling down to win. That’s just what Stricker did Monday on Maui, when he won the Tournament of Champions with a final round that only looked easy on paper.

“I’ve been there before. It’s not a great feeling, either,” Stricker said after closing with a 4-under 69 for a three-shot victory over Martin Laird. “It’s just the nature of our game. I realize that, and I’ve gone through it before. It always seems close, and you always have to perform to get it done.”

Ultimately, that’s just what he did.

It took only six holes for him to see his five-shot lead dwindle to one. After another mental mistake led to bogey, Stricker stood behind the sixth green staring at the ground, shaking his head, disgusted with himself. It was during that long walk down the seventh fairway, the Pacific Ocean on the horizon, when Stricker reminded himself that at least he was still in the lead.

And that’s where he stayed.

He buried a 25-foot birdie putt on the par-3 eighth, hit a pitch to tap-in range for birdie on the ninth to build his lead back to three, and then it was a matter of hanging on.

It was the fourth time in his last 35 tournaments that he had at least a four-shot lead at some point in the final round. At least they all had the same outcome. Stricker hit sand wedge to 2 feet for birdie on the 16th to keep a two-shot cushion, then birdied the final hole for the best prize he could ever imagine.

Along with the winner’s lei draped around his neck, his two daughters - 13-year-old Bobbi Maria and 5-year-old Isabella - rushed onto the green to give him a hug.

“It was tough,” said Stricker, who finished at 23-under 269. “I never let up today. It’s always tough trying to win, and it’s even more tough when you have a lead like I did. I’m very proud of what I did today.

“And it’s always cool to get a hug from your family walking off at the end.”

Stricker held back tears - they usually flow freely after a win - perhaps a sign that he’s getting used to this business of winning. It was his ninth PGA Tour win since he turned 40, and his eighth title in his last 50 tournaments. He moved up to No. 5 in the world.

Perhaps even more satisfying is that four months ago, Stricker felt weakness in his left arm from a lingering neck injury and contemplated surgery. He decided to treat it with therapy and a few cortisone shots, and it turned out to be a good move.

A guy whose goal every year is to get back to Kapalua for the winners-only season opener can already make reservations for next year.

Laird, Webb Simpson and Jonathan Byrd each got within one shot of Stricker on the front nine, but not for long.

“I think probably the most underrated player in the world is Steve Stricker,” Laird said.

Laird closed with a 67, and his birdie on the last hole put him alone in second place, which at least helps him start building world ranking points toward trying to make Europe’s Ryder Cup team for the first time.

Byrd kept most of the pressure on Stricker along the back nine of the Plantation Course. He was two shots behind when he stuffed his wedge into 4 feet on the 16th, but then Stricker followed with his sand wedge to 2 feet. Byrd’s hopes ended when he bogeyed the 17th, then put his approach on the par-5 18th into the bunker and made par. He closed with a 68 and tied for third with Simpson (68).

The PGA Tour got off to a good start, too. There was so much focus at the start of the week on who didn’t show up at Kapalua for this winners-only event - three major champions, all of whom live overseas, along with three players who are recovering from injury.

Stricker was the highest-ranked American in the field, and played the best golf.

This was the fourth time in the last two years that Stricker led a big lead turn into some nervous moments on the last day.

— At the John Deere Classic in July, he watched a five-shot lead with nine holes to play turn into a two-shot deficit with two holes to play before he rallied to beat Kyle Stanley with an exquisite birdie on the last hole.

— At the Memorial in June, he had a four-shot lead at the turn and was still three shots clear with five to play. He held on to win by one.

— At Riviera in 2010, his six-shot lead going into the final round was down to two shots after only six holes. Stricker steadied himself and went on to win by two.

Monday on Maui was not much different.

Byrd made three straight putts early in the round, two of them for birdie, and Simpson in the group ahead made an eagle at No. 5. Stricker settle for pars, which was not a problem as long as he took care of the birdie holes.

But he didn’t. Stricker three-putted for par from just over 30 feet on the fifth, then hit a fluffy pitch that came up short of the sixth green and let to bogey as Byrd made another birdie for a two-shot swing.

Stricker stood at the back of the green while Byrd was making his putt, shaking his head, clearly flustered. It only took six holes for his five-shot lead to shrink to a single stroke, with 12 holes ahead of him. His next birdie putt didn’t even come close.

But on the hole that has given him fits this week, Stricker hit a pure shot into 25 feet on the par-3 eighth and made it for birdie, then birdied the ninth to regain control.