Stricker's winning formula: 'I just do what I do' 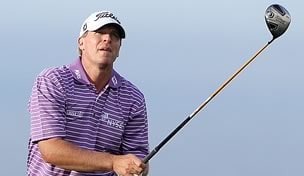 KAPALUA, Hawaii - Mention the best American golfers and Steve Stricker is on everyone’s list, just as he was 15 years ago.

The difference is that he bought into it back then.

He was the highest-ranked American in the field at Kapalua, where the no-show list of 11 players included three major champions. Stricker was asked at the start of the week if he saw himself as the main headliner. He smiled sheepishly and said, “No.”

“There’s nobody I would rather watch play golf than Steve Stricker, personally, as a fan,” PGA Tour commissioner Tim Finchem said on Sunday as Stricker was leading by five shots in the third round.

When this was mentioned to Stricker, someone jokingly suggested that Finchem was sipping a Mai Tai when he said it.

“Was he drunk?” Stricker said with a laugh.

Stricker won the Tournament of Champions by three shots on Monday. It was his eighth win in his last 50 tournaments, the highest winning rate of anyone on the PGA Tour in that span. Martin Laird, the runner-up, called Stricker the most underrated player in golf.

His reaction? Another smile.

Winning for the 12th time in his career was special, along with telling his family they get to come back to Maui next year. Having his two daughters greet him with a hug on the 18th green made it even sweeter. The plaudits? The world ranking? Trying to assess where he belong among a global lineup of stars?

It no longer matters to him.

What defines Stricker is what caddie Jimmy Johnson says to him whenever he needs a pep talk.

“I think that sums it up the best,” Stricker said. “We just go about and do our thing. It may not be the flashiest thing at times, but I do other things well. I chip and putt well. I’m driving the ball well. Everybody has got a little bit different game, and that’s the way I look at mine. Do the things that we know how to do the best.”

It wasn’t always that way.

Just when he was starting to hit his stride, Stricker looked around and started to wonder if he was good enough.

“I tried to compare myself to guys when I was playing well back in the mid-90s, and I got into some bad things,” he said.

One of those guys was Tiger Woods.

Stricker was regarded as one of the rising Americans in 1996, when he broke through by winning the Kemper Open and the Western Open and finished at No. 4 on the money list. A few months later, Woods turned pro and won twice in seven starts.

When he arrived at the Pebble Beach National Pro-Am the following February, Stricker was at No. 13 in the world ranking. Woods was one spot behind at No. 14. Phil Mickelson was No. 7, the highest of American golfers in their 20s.

Stricker was paired with Woods for three rounds—Stricker had sportscaster Bryant Gumbel as an amateur partner, Woods had actor Kevin Costner. Stricker didn’t make it to Sunday, tying for 66th. Woods was runner-up to Mark O’Meara.

“We were paired together at Pebble Beach, and I walked away from there feeling my game was not anywhere close to him. And it wasn’t,” Stricker said. “He’s probably done that to other players, too, don’t you think? I just didn’t think I had the skills or ability he had. But I’m OK with it now.”

That was the beginning of what once looked like the end.

Stricker traveled too much in the offseason after his banner year, going to South Africa and Scotland. He typically spends a long offseason home in Wisconsin, and when he returned to golf, it felt more like work than pleasure.

He also took advantage of his success by signing lucrative deals with equipment companies, which added to his troubles. And then came the pairing with Woods at Pebble Beach.

Stricker plunged to No. 130 on the money list that year, recovered briefly in 1998 when he had a back-nine duel with Vijay Singh at Sahalee in the PGA Championship, the big Fijian’s first major.

There also was a brief return in 2001 when Stricker, who was No. 90 in the world, got into the Match Play Championship in Australia because more than two dozen players ahead of him decided not to play. Stricker wound up winning, beating Ryder Cup players Padraig Harrington and Justin Leonard in the opening two rounds.

And then came the abyss that nearly ended his career, when he lost his PGA Tour card and only pulled himself out by hitting balls out of a three-sided trailer in Wisconsin to a driving range covered in snow.

“Some of it was seeing the ability Tiger had,” Stricker said. “Then I started trying different things, different equipment. And I played a ton of golf in the fall. I didn’t get away from the game. As you know, you have to be fresh. You have to want to be out there.”

What a renaissance this has been.

Stricker won The Barclays in 2007, the first FedEx Cup playoff event. He won three times in 2009, twice more in 2010 and 2011, and started the 2012 season with yet another trophy. He has risen as high as No. 2 in the world. When he won the Deutsche Bank Championship in 2009, it was his first win with Woods in the field.

He was paired with Woods at the start of every playoff event in 2009. They were represented by the same agent (Mark Steinberg) for years, but never were particularly close until that year. Stricker still noticed a difference in their ability. But he knew he was capable of good golf himself.

“I had built up some confidence, and I wasn’t worried about what he thought, or how I played with him,” Stricker said. “Then we started getting paired together, and then were partners in the Presidents Cup and Ryder Cup. And we became … well, we are friends. And now, it’s like going out to play with my friend. I don’t care about that stuff anymore.