Tiger never ceases to amaze, even his caddies 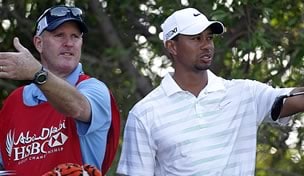 PEBBLE BEACH, Calif. – It only took Mike “Fluff” Cowan one tournament as the caddie for Tiger Woods to see a shot he had never seen.Joe LaCava had that moment in his third week working for Woods.

Cowan was the first caddie Woods hired when he made his professional debut in the 1996 Greater Milwaukee Open. He doesn’t remember which round, or even what hole they were on, just the club selection off the tee.

“It was his stinger, his 2-iron,” Cowan said, looking around until he locked his eyes on the waist-high mesh around the practice green at Sherwood Country Club. “It didn’t hardly get over that green net. But it stayed in the air forever. It went out there 270 yards or something. That was the one that got me.

“It was just a different kind of shot that I had ever seen anybody hit.”

LaCava, hired by Woods in October, had spent plenty of time around the 14-time major champion during his 20 years on the bag with Fred Couples, with whom Woods often played.

Even so, a 3-wood on the par-5 15th at Royal Melbourne during the Presidents Cup got his attention, and a few weeks later, he still had trouble describing what he saw.

“He hit it such a way that it was trajecting like this,” LaCava, using his hand to show a flat line with the slightest downward arc. “But it wasn’t coming down. It wasn’t rising, either. It’s hard to describe. It was gaining speed, but it wasn’t going up. That’s when I thought, ‘This guy is making the ball do something I’ve never seen anyone else do.’ I had never seen a trajectory like this on a 3-wood or any other shot.”

LaCava said the pin was cut in the front right portion of the green, and the ball finally stopped in the back left corner. The shot was into the wind, and in firm conditions, and he estimates it went just under 270 yards.

Just then, Woods walked up on the discussion. And when he sensed the conversation ending, he said, “Keep going.”

“Look at that little grin on his face,” LaCava said. “He knows what I’m talking about. But he won’t say anything about it.”

MATCH PLAY: This is the final week to qualify for the Match Play Championship, making the world rankings relevant for the first of several times this year.

Among those on the bubble for the 64-man field are Ernie Els (No. 62), followed by Kevin Na, Robert Allenby, Ryan Moore and Charles Howell, who at No. 66 is currently just beyond getting the final spot at Dove Mountain in two weeks.

That depends on Paul Casey, who dislocated his right shoulder while snowboarding. Casey is on the mend, and there is an outside chance he could play. Phil Mickelson already has said he is not playing.

Na tied for fifth in the Phoenix Open, moving up nine spots to No. 63. He can nail down his spot in the World Golf Championship at Pebble Beach this week, as can Ryan Moore at No. 65.

The others can only hope they hold their positions. Els, Allenby and Howell are not playing the Pebble Beach National Pro-Am or the Dubai Desert Classic.

Eight of the next 10 players beyond No. 66 are playing this week - Joost Luiten, Rory Sabbatini, Nicolas Colsaerts, Alex Noren, Spencer Levin, Sean O’Hair, Vijay Singh and Chez Reavie. The exceptions are Toru Taniguchi (No. 70) and Johnson Wagner (No. 73).

INKSTER OUT: Even when she took time off the LPGA to have two children, Juli Inkster never went more than a month without playing golf. Now comes her biggest challenge.

After trying to cope with pain in her right elbow, Inkster had surgery Jan. 27 to repair a torn tendon. The 51-year-old Hall of Famer will be in some form of a cast for the next month and might not be able to return until the middle of summer at the earliest.

That’s OK with her.

“It’s going to take a lot of work, but I want to go out on my terms,” Inkster said. “This is the first injury I’ve ever had. Before the surgery, I was kind of floundering. I wouldn’t say I can see the light at the end of the tunnel, but at least this is the start of the tunnel.”

The tough part will be finding something to do, except for the physical therapy. Inkster is all about competing. It’s been in her blood since she won the U.S. Women’s Amateur three straight years and then went on to the career Grand Slam.

“Me? How do you think Brian is feeling?” said Inkster, whose husband is the head pro at Los Altos Country Club. “I’m sure there’s going to be some ‘Sorry, I’ve got another meeting today, honey.’ I think once I get started with physical therapy I’m going to be fine. But I’ve been watching a lot of ‘NCIS.’ It got to the point where I was watching so much football I started calling the plays.”

RYDER CUP: Kyle Stanley has shot to the top of the U.S. Ryder Cup standings with his playoff loss at Torrey Pines and win in Phoenix.

But there’s a long way to go.

Thanks to Paul Azinger’s captaincy, Ryder Cup points are based on all PGA Tour earnings this year, with the majors counting double. There are still four majors, three World Golf Championships ($8.5 million purse), The Players Championship (at least $9.5 million) and three other events with at least $6.5 million in prize money.

Here’s another way to look at it.

After the Phoenix Open in 2010, the top eight in the standings were Steve Stricker, Dustin Johnson, Lucas Glover, Stewart Cink, Hunter Mahan, Tiger Woods, Phil Mickelson and Ben Crane. Only four of them – Stricker, Johnson, Mahan and Mickelson – qualified.

Three others who made the team – Bubba Watson, Jim Furyk and Jeff Overton – were not even among the top 25 in the standings. The other was Matt Kuchar, who was 13th at this time and wound up getting the final spot.

DIVOTS: Daniel Chopra had a day to remember at Pebble Beach during a practice round Monday. He made a hole-in-one on the seventh hole and then made another ace on the 17th. … Karrie Webb, the only woman to capture the LPGA’s “Super Slam” of five majors, was awarded honorary membership at Royal Melbourne Golf Club. … The U.S. Golf Association will award exemptions to the U.S. Open and the U.S. Women’s Open to the players who win the Mark H. McCormack medal as the leading amateur. That would be Patrick Cantlay (already eligible as the U.S. Amateur runner-up) and Lydia Ko, the 14-year-old from New Zealand who recently became the youngest winner of a tour event. … Valero has signed a six-year extension as the title sponsor of the Texas Open. The new deal takes the sponsorship through 2018. … The LPGA added another marketing partner Tuesday by signing Volvik, a Korean golf ball company.

STAT OF THE WEEK: Adam Scott is the only player from among the top 20 in the world who has yet to play a tournament this year.

FINAL WORD: “I fear we would be eating our own children if we went to two sets of rules.” - USGA president Glen Nager.