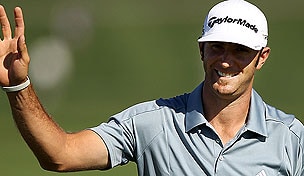 PEBBLE BEACH, Calif. – Dustin Johnson took revenge on the hole that cost him so badly two years earlier by firing an eagle at the third Thursday, setting up a round of 9-under 63 that gave a share of the lead in the Pebble Beach National Pro-Am.

Johnson shared the lead with Charlie Wi, who flirted with a round of 59 before finishing with a 9-under 61 at Monterey Peninsula in the three-course event, and former U.S. Amateur champion Danny Lee, who matched Johnson’s 63 at Pebble Beach.

Tiger Woods was five shots to par off the lead after a 4-under 68 at Spyglass Hill; the fourth-best score on that course.

Johnson is a two-time winner of this event and in 2010 he held a three-shot lead in the U.S. Open on the same course until he carded an 82 in the final round. On the third hole of that fateful round, he drove into the bushes for a lost ball and a double bogey.

On Thursday, he smashed a driver nearly 340 yards over the trees to just short of the green, then pitched in from 41 yards for an eagle.

“Walking off that hole, I told Bob, 'This hole owes me a few more than just that one.”’

Meanwhile, Wi had a strong chance of carding a 59 without ever knowing it. He was 8 under after a tap-in birdie on the 13th hole, and needed only three birdies in the last five holes to go below 60. Trouble is, he had no idea the Shore Course was a par 70. He made one more birdie and had a 9-under 61.

Lee holed a bunker shot for eagle at No. 2 and holed out from the 11th fairway with a wedge for another eagle to take a share of the lead.

Johnson overpowered the par 5s at Pebble Beach, the secret to playing that course well. He had a 6-iron for his second shot at the par-5 second for an easy birdie, holed a 65-foot eagle putt on the sixth hole, got up and down from a bunker on the 14th for birdie, then cringed when his 40-foot eagle attempt on the 18th just turned away.

“I thought it was going in,” Johnson said. “I was laughing. I made plenty of putts today.”

He opened with consecutive birdies, stuffing his approach on No. 10 and two-putting for birdie on the par-5 11th. He also holed a downhill, 8-foot birdie putt on the 17th that was good enough to elicit a small fist pump, and from behind the par-5 opening hole, hit a flop shot to 7 feet and made that.

He made two bogeys and played the par 5s in 3 under.

“I don’t know if it’s a good sign or a bad sign,” Woods said about his 68. “With the scores the way they are, I thought I could have it lower than I did. The guys are just tearing this place apart with no wind. I’m not too far away from posting a good number out here.”

His partner, Dallas Cowboys quarterback Tony Romo, contributed pars on the holes where Woods made bogey, and Romo had a birdie on the par-5 14th when Woods missed the fairway and had to settle for par. As a team, they were tied for 25th.

Romo gets to play a forward tee, but he doesn’t get any shots with a scratch handicap.

Phil Mickelson (2-under 70) always entertains at No. 4 at Spyglass, a tee shot that gives him so much stress each year. He is determined to hit driver, and did again Thursday, this time relieved to at least be able to find it. And while he missed a 7-foot birdie putt after a splendid flop out of deep rough that ran 100 feet across the green, Mickelson was glad the hole was behind him.

“The greens were perfect,” Mickelson said. “They rolled so good, and that’s why it was disappointing to let some of those go. I’ve been putting really well lately, and I expected to make some of those. Shot a couple under par, but it could have been a lot better.”

Ken Duke shot a 28 on the back nine at Pebble Beach and was at 8-under 64, along with Brian Harman. Nick Watney and Kevin Na each had a 6-under 66, the lowest score from Spyglass.

The conditions were so good that more than half the field broke par no matter where they were playing.