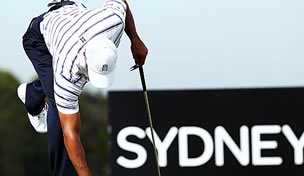 Getty Images
HUMBLE, TX - APRIL 3: Cameron Percy of Australia watches his tee shot on the second hole during the third round of the Shell Houston Open at Redstone Golf Club on April 3, 2010 in Humble, Texas. (Photo by Hunter Martin/Getty Images)  -

SYDNEY – No more than 250 people followed Tiger Woods early Wednesday at the Australian Open, a sign that while he still is the main attraction Down Under, it’s not what it used to be.

When he first put Australia back on his golf schedule two years ago, some 15,000 fans complained during the pro-am round that news helicopters hovering over Kingston Heath in Melbourne kept them from hearing. The only noise over The Lakes came from endless flights taking off from the airport.

For sure, the novelty of Woods in Australia has worn off after three years.

And in large extent, so has the mystique.

This is the two-year anniversary of the last time Woods won any tournament, at the Australian Masters in 2009, when he was on top of his game and No. 1 in the world by such a large margin that it took nearly a year of mediocrity for someone to replace him. The sex scandal that shredded his personal life was exposed about two weeks after he got home.

That’s 25 tournaments worldwide, no trophies to show for it.

“In order to win golf tournaments, you’ve got to play better than I have played,” Woods said. “And as I said, making changes to my game along the way, it’s been frustrating because I haven’t been able to dedicate my time to it.”

As always, no one is sure what to expect from when he tees off Thursday afternoon. In his last start a month ago at the Frys.com Open, he was never a factor and tied for 30th. In his previous start seven weeks earlier, he missed the cut at the PGA Championship.

Now, he commands attention for everything going on around him.

It started when U.S. captain Fred Couples, declaring Woods to be the best player “forever,” said three weeks before the Presidents Cup team was decided that he would be using one his picks on him.

Then, right about the time Woods arrived in Australia for a corporate outing, he got word that ex-caddie Steve Williams used a racial slur to disparage him at a caddies award party in Shanghai. That led Williams to issue a statement of apology, new boss Adam Scott to say the comment was wrong but the apology was enough not to fire Williams, and for Woods to take the high road in saying that it was the wrong thing to say but that he’s moving forward.

Woods said Williams apologized when they ran into each other earlier in the week at The Lakes and shook hands when it was over, even though no one gets the sense this is really over.

For now, the attention will attempt to shift to the golf, and to the best field this proud championship has had in years.

The Australian Open is the fourth-oldest national championship behind Britain and the United States, and behind Canada based on the calendar. It’s past champions include Gene Sarazen, Arnold Palmer, Jack Nicklaus, Gary Player, Tom Watson and Greg Norman. The last time the Presidents Cup was held in Australia in 1998, the Australian press asked players if it should be the fifth major.

Woods is among 13 players at the Australian Open – along with captains Norman and Couples – who will be in the Presidents Cup next week at Royal Melbourne.

He will play the opening two rounds with Jason Day and Robert Allenby, with Scott (and Williams) in the group ahead of him.

There remain questions whether Woods can contend, something he hasn’t remotely done since The Masters in April, and constant speculation whether he can ever get back to the top.

“It has to be hard,” said Geoff Ogilvy, the defending Australian Open champ. “It is such a visible rehab for him. I can get injured and no one cares or notices. He ties his shoes wrong and it’s world news. I know he had struggled with his knees basically his whole life. You saw him at The Players Championship. He couldn’t walk. You can’t play golf when you can’t walk. You can’t practice.

“That, with all the other things that have been going with him, have contributed to making it hard for him to get to where he wants to get.”

Woods has attributed his demise mostly to the physical part of his game – changing swing instructors in August 2010, then coping with injuries to his left knee and Achilles’ tendon that eventually led to him out of golf for four months.

He now is clear to practice and to work out. What he lacks now is competition.

“I haven’t played a lot of tournaments this year,” Woods said. “I’ve missed pretty much the entire summer.”

He embarks on a stretch of three events in four weeks, concluding with his Chevron World Challenge the first week in December, before taking an offseason break for about six weeks.

This could take time, though his peers that once expected nothing but the best have not given up on him. That includes Scott, who finds himself in the middle of a spat between Woods and Williams.

“You can lose the form, but you never lose that talent,” Scott said. “Once he gets back into those positions with his game, he’ll find it not too hard to have that edge again. You can’t write the guy off. Every time we have, he has proved us wrong in the past. This seems like a longer time than before. He has not played that great.

“I’d love to be at the top of my game when he is back at top of his game,” he said. “I’ve love to compete against him. I’d like that opportunity. I think it would be good for the game of golf.”