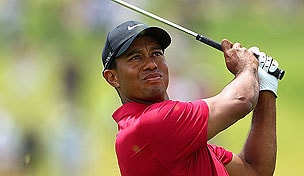 SAN DIEGO—Tiger Woods and Torrey Pines used to be a winning combination.

Except for his first full season on the PGA Tour, Woods never missed what used to be called the Buick Invitational, the same brand that happened to be on his golf bag. He not only won six times, his worst finish was a tie for 10th, when he finished two shots out of a playoff.

Woods winning at Torrey was so predictable that in 2008, when the public course along the Pacific Ocean was to host the U.S. Open that summer, he opened with a 67 on the South Course. A caddie watching from behind the 18th green said, “He just won two tournaments with one round.” And he was right.

Woods can be found 12 time zones away this week in Abu Dhabi, where he joined the rest of the European Tour stars.

This will be the third time in the last four years that Woods will not be at Torrey Pines to start his season. He was recovering from knee surgery in 2009, and he was in a Mississippi clinic in 2010. A year ago, still in the early stages of revamping his swing, he couldn’t break par on the weekend and tied for 44th.

His absence is an example of how little it takes for the landscape to evolve on the PGA Tour, which can have more to do with the tournaments than the players they try to attract.

Woods has his own agenda, and he has that right.

He is getting a $1.5 million appearance fee at the Abu Dhabi HSBC Golf Championship, and while that’s about half what he used to get, the practice dates to the era of Arnold Palmer and Jack Nicklaus. In this case, Woods has a relationship with the title sponsor, which supports his foundation. Woods has been mixing golf with business as long as he’s been on tour, and he’s not alone.

Torrey Pines is still the first PGA Tour event on network television. It’s still a pretty place to be. But it is lacking luster, and that would have been unfathomable just four years ago.

That it follows the Humana Challenge only illustrates how quickly the perception of tournaments can change—good and bad.

The Humana Challenge no longer has Bob Hope in the name of the tournament, but that beats having no hope at all. Such was the case only a few years ago when it was considered to be on life support. It had no title sponsor. Phil Mickelson, the star attraction, stopped playing when the event tried new courses such as the Classic Club, which was anything but that.

Humana came on board, along with former president Bill Clinton, creating a platform to preach good health. The bigger change was reducing the event from five rounds to four, the rotation from four courses to three, the format from three amateurs to two.

It was a smash hit.

Mickelson returned. So did Greg Norman, mainly to play the third round with Clinton. The field strength was nearly double what it had been in recent years.

A half-dozen other PGA Tour events can appreciate the turnaround.

The Houston Open used to be a few weeks after the Masters, which one magazine referred to as “No Man’s Land.” It was a dead time in golf, between the Masters and late May when focus shifts to the next major.

“The historical weakness of our player field had become such a topic that we were continually working to overcome that in the local market, much less with the national perception,” tournament director Steve Timms said.

Opportunity didn’t so much knock as it tapped on the door.

Atlanta wanted out of its date before the Masters because of bad weather (and because Woods doesn’t play that week). The Players Championship moved from March to May.

The Houston Open took the date, not knowing if it would work. Then, Augusta National went back to offering a spot in the Masters to PGA Tour winners, and Houston no longer had a problem—it had an identity.

It was the last chance to get into the Masters. That coincided with a surge in Europeans, many of whom play Houston to get ready for the Masters. The tournament did its part by trying to create course conditions to help players prepare for Augusta.

The Honda Classic felt like it was that “other” event in Florida—stuck behind Doral, right before Bay Hill and The Players. Then it settled on a solid course (PGA National), The Players moved to May and Doral became a World Golf Championship. That means there are two WGCs in a three-week span, with Honda in the middle.

Now it gets Rory McIlroy and Lee Westwood, among international stars, and is likely to get Woods, who has moved to the area.

The Wyndham Championship in Greensboro, N.C., also was on the ropes. It had been in that dead zone after the Masters, and when Chrysler was the sponsor, the company preferred being in the fall to coincide with the auto shows.

The tournament made some changes on its own—a new board of directors, moving to Sedgefield Country Club, a new title sponsor and a new date—the week after the PGA Championship and before the FedEx Cup playoffs begin. It now is the last chance for players to qualify for the playoffs or improve their position and last year attracted the likes of Ernie Els, Padraig Harrington and Jim Furyk.

“All those things were the right move,” tournament director Mark Brazil said. “We’ve seen '09 better than '08, '10 better than '09, and '11 way better than '10 from a field perspective. It’s still a challenging date, but it’s starting to work.”

The John Deere Classic has settled into a date the week before the British Open. The Barclays took the opening playoff event and boasts the strongest and deepest field this side of the majors and The Players. It also has a great rotation of courses.

As for Torrey Pines?

Abu Dhabi very well could be a one-year agreement with Woods. He might be back next year.