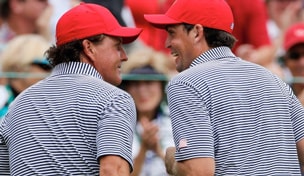 DUBLIN, Ohio – Marc Leishman delivered one clutch putt and one perfect 7-iron to keep the International team in range at the Presidents Cup.

In the pivotal match of four games carried over to Saturday morning because of rain, Leishman and Angel Cabrera outlasted Brandt Snedeker and Webb Simpson for a 2-and-1 victory that gave the Internationals a 3-3 draw in the foursomes sessions.

It kept the American lead at one point, 6 1/2-5 1/2, going into a long day that featured 10 matches. And it was the first time since 2005 that the Internationals did not lose a foursomes session.

Tiger Woods and Matt Kuchar polished off Louis Oosthuizen and Charl Schwartzel, 4 and 2, keeping that American tandem undefeated in both matches at soggy Muirfield Village. Kuchar won the Memorial in June, while Woods is a five-time winner at Muirfield Village.

Steve Stricker holed a 20-foot birdie putt on the 15th hole to thwart an International rally, as he and 20-year-old Jordan Spieth picked up a 2-and-1 win over Branden Grace and Richard Sterne. Stricker (46) and Spieth - the oldest and youngest players at this Presidents Cup - also improved to 2-0.

Adam Scott and Hideki Matsuyama also remained unbeaten. They were 5-up through 12 holes until Jason Dufner and Zach Johnson staged a rally with birdies on the next three holes. The next two holes were halved in pars, giving the Internationals a 2-and-1 win.

The big match, though, was Leishman and Cabrera.

They were 1 up when play was halted because of darkness Friday, following a rain delay of nearly three hours. When the match resumed - it was almost as dark Saturday morning as it was Friday night when they stopped - Snedeker drilled a 9-iron to within inches of the cup for a birdie on the 14th to tie the match.

Leishman then rolled in an 8-foot birdie putt on the 15th for a 1-up lead. Two holes later, he hit 7-iron from 191 yards that plopped down next to the cup for birdie to win the match.

The Americans have lost the Presidents Cup only once since it began in 1994 - 15 years ago in Australia. The last three have not been particularly close, so the Internationals are at least making a game of it.

Saturday figured to be crucial, provided the rain held off. Even before the second session wrapped up in the morning, the third session of five fourballs matches was under way. That was to be followed by five foursomes matches, leading into 12 singles matches on Sunday.

With more rain in the forecast over the weekend, officials said the Presidents Cup could be extended to Monday. In a peculiar agreement, tournament director Steve Carman said if it did not finish by Monday night, the score of all matches completed at that time would be the final result.