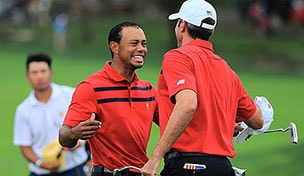 Getty Images
Big Break Greenbrier's Brian Cooper poses with a miniature version of the Big Break rock in the background.  -

DUBLIN, Ohio – The Presidents Cup has a familiar feel in so many ways.

Players leave every night in darkness and resume matches the next morning when it's almost as dark. The rain never leaves, with another half-inch accumulating on top of a previous inch of rain that led to yet another delay Saturday. The ball doesn't bounce when it lands on the green. It splats.

And the International team is still trying to figure out what it has to do to beat the Americans.

When another long day ended at Muirfield Village, the Americans were assured of the lead going into the final round of singles matches. Zach Johnson took care of that with a wedge from 115 yards that disappeared into the cup for eagle on the 15th hole as he and Jason Dufner completed the only foursomes match with a 4-and-3 victory.

Tiger Woods and Matt Kuchar were doing their part, having won every match they played. Woods delivered another signature moment in the Presidents Cup, hitting a fairway wood that plopped down 4 feet below the pin for an eagle that was conceded and a 2-up lead that allowed them to rally for a fourballs win earlier Saturday.

Woods and Kuchar were 2 down at the turn in their foursomes match against Ernie Els and Brendon De Jonge.

''This guy is a horse – holy cow!'' Kuchar said. ''He played some incredible golf today.''

Still to be determined was how big the lead was going to be.

The other four matches were to be completed Sunday morning – weather permitting – and the Americans were leading 11 1/2 to 6 1/2. They were 2 up in one match, while the Internationals were 3 up and 2 up in two others. The fourth match was all square, momentum on the American side.

''Well, it's not over,'' International captain Nick Price said. ''We've still got a lot of golf to play tomorrow, and I have the utmost confidence in these guys that they can turn those two games around. We don't want to go into the singles with too much of a deficit.''

Since the Presidents Cup began in 1994, no team has ever trailed going into singles and won outright. The Americans were three points behind in 2003 and rallied for that infamous tie in South Africa.

''The U.S. has really been unrelenting,'' Price said. ''They have just played superbly the last three days. Any slip from us and we find ourselves one or two down very quickly.''

The final hour was another example of that.

Early in the foursomes session, the board was filled with blue International scores on the front nine. Steve Stricker and Bill Haas warmed up their putters and went from 1 down to a 2-up lead through 10 holes. Phil Mickelson and Keegan Bradley, who rallied earlier in a fourballs match to win, were 3 down through seven holes when Mickelson made two big putts that led to them squaring the match through 14 holes.

Louis Oosthuizen and Charl Schwartzel were 3 up over Webb Simpson and Brandt Snedeker through 12 holes.

''We're still in pretty good shape,'' Price said. ''If we can turn one of these games around tomorrow, it would make our life a lot easier going into singles.''

But not that easy. The Americans have a 5-1-3 advantage in the singles session at the Presidents Cup, the only loss coming in 2007 at Royal Montreal when they started the final round with a seven-point lead.

The International team was doing well to stay in range until one session put it in a big hole.

The long day began with Angel Cabrera and Marc Leishman coming up with big shots late for a 2-and-1 win, which enabled the Internationals to scratch out a 3-3 draw in foursomes that began on Friday. It was the first time since 2005 that the Internationals won a foursomes session.

But in fourballs, everything changed. Mickelson and Bradley made seven birdies in an eight-hole stretch to go from 2 down to a 2-and-1 win over Els and de Jonge. Woods and Kuchar were never in control of their match against Adam Scott and Hideki Matsuyama until Woods took over.

He hit an approach to 5 feet for birdie on the 13th, Kuchar finally made a putt with a 7-foot birdie on the 14th and Woods drilled that fairway wood into the 15th for eagle. He crouched and extended his arms as he marched along, and the 2-up lead was too much for the International side to overcome.

Woods was not made available for interviews. The second of two questions on a transcript the PGA Tour distributed mentioned that he was 3-0 and asked how his week was going so far.

The Americans wound up going 4-1 in the fourballs scheduled for Saturday morning. It was the most lopsided session this week, but it was enough to make the International team face another tough climb if it wants to take home the gold cup it has won only one time – 15 years ago.

The lone International win in fourballs came from Jason Day and Graham DeLaet, who gave Stricker and 20-year-old Jordan Spieth their first loss. The American tandem of young and old – Stricker at 46 is the oldest player on either team – fell behind for the first time all week. Stricker's birdie on the 15th tied the match, only for DeLaet to stuff his tee shot to 6 feet for birdie on the 16th for a lead they held.

Dufner sat out the morning fourballs. Mahan, along with Spieth, sat out in the afternoon foursomes. U.S. captain Fred Couples was pleased that both contributed when it was their turn to play.

He has gotten that out of all his players – each one has contributed at least a point his week. On the International side, Branden Grace and Richard Sterne have been shut out. Sterne was with Leishman in the afternoon foursomes. They were 2 up through seven holes until Johnson and Dufner won six out of the next eight for another American point.