Walker leads Pebble by six after windy third round 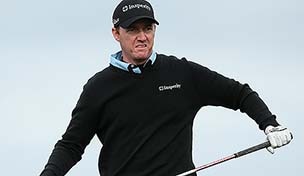 PEBBLE BEACH, Calif. - Jimmy Walker had a hot hand in the cold wind Saturday and built a six-shot lead in the AT&T Pebble Beach National Pro-Am.

Walker made his first bogey of the tournament, and that hardly slowed him. He countered with five birdies in 30 mph gusts at Monterey Peninsula for a 4-under 67, leaving him on the verge of his third PGA Tour victory this season.

Tim Wilkinson of New Zealand had a 69 and Hunter Mahan had a 72, both at Monterey Peninsula. They were at 208.

Jordan Spieth, tied with Walker going into the third round, had to face Pebble Beach at its fiercest. He was 5 over through 15 holes - nine shots out of the lead - when the third round was halted by darkness.

The wind was so strong that the third round was delayed for 2 hours, 19 minutes because golf balls were rolling off some of the greens. It was a peculiar sight to see clouds gathering on the Pacific horizon, and officials trying to spray water on the greens to help balls stay on the putting surface.

And when play resumed, Brian Gay was given relief on the fourth green at Pebble Beach because of standing water left from hosing down the greens. He was able to move his ball some 15 feet to the other side of the green.

But the big trouble was the wind.

Kevin Chappell's approach to the par-3 fifth sailed over the cliff, and he ambled down toward the beach to play the shot. The par-5 sixth at Pebble, usually reachable with a long iron, was a true three-shot hole. On the 109-yard, downhill seventh hole into the wind, the club of choice was a chip 8-iron.

It was most difficult with the putting - being able to stand over the ball, trying to hit it as it wobbled and judging the speed. Geoff Ogilvy three-putted from 3 feet twice in a three-hole stretch on his way to an 81. Spieth had a pair of three-putts that sent him tumbling out of contention. The worst was on the ninth, when he gunned his 12-footer for par about 4 feet by the hole, sent the next one 5 feet by on the other side and raised his arms in mock triumph when he made the third one.

The scoring average at Pebble was just over 75.

No course was easy. The Shore Course at Monterey Peninsula has played the easiest of the week, though it has some 10 holes that run along the ocean, exposed to the wind. Walker played through it beautifully, and now is in great position going to Sunday.

Richard Lee had a 72 at Spyglass Hill and was alone in fourth place at 6-under 209.

Phil Mickelson had a 71 at Spyglass and was eight shots behind.

Walker's six-shot lead was the largest through 54 holes at this tournament since Mickelson led by seven in 2005. Mickelson went on to win by four.