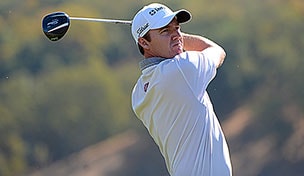 Getty Images
UNITED STATES - SEPTEMBER 22: Tiger Woods and Fred Couples of the U.S. team during the first round of The Presidents Cup at Robert Trent Jones Golf Club in Prince William County, Virginia on September 22, 2005. (Photo by Sam Greenwood/Getty Images)  -

SAN MARTIN, Calif. – Jimmy Walker finally won on the PGA Tour in his eighth year and 188th tournament, and with a little help from Brooks Koepka.

Tied for the lead with four holes to play Sunday, Walker rolled in a 6-foot birdie putt on the 15th hole to take the lead for good in the Frys.com Open. Three closing pars for a 5-under 66 turned out to be more than enough for the 34-year-old Texan to take home a trophy and plenty of perks.

''I think it will sink in after a while,'' Walker said. ''Relief right now. It feels really good. I'm pretty excited.''

It was a sinking feeling for Koepka, whose journey around the world in a remarkable year nearly ended with a PGA Tour card.

Koepka had a four-shot lead with 11 holes to play, and the 23-year-old Floridian looked as poised and confident as he had all week at CordeValle. There was a tiny crack when he missed a 3-foot par putt on the ninth hole, and it really caught up with him at the end.

Koepka missed a 6-foot putt on the 15th that would have matched birdies with Walker, who was playing in the group ahead of him. Koepka then missed his tee shot wildly to the left on the 16th hole and had to scramble for bogey. Down to his last shot, he hit into the water on the 297-yard, par-4 17th for another bogey.

''Things weren't going my way,'' Koepka said. ''I didn't make the shots I needed to win. Congrats to Jimmy on that. I'll try to learn from the whole experience.''

Vijay Singh closed with a 68 and wound up with the 27th runner-up finish of his Hall of Fame career, and his best result since he sued the PGA Tour in May over its handling of the investigation into Singh admitting he used deer antler spray.

Koepka, who closed with a 72, wound up in a tie for third with Kevin Na, Puerto Rico winner Scott Brown and Hideki Matsuyama, the 21-year-old Japanese star who is playing the PGA Tour for the first time. He was in the Presidents Cup last week.

The Frys.com Open is the season opener in the new PGA Tour schedule, which starts in October instead of January for the first time in history. Instead of a Fall Series event where players mainly were trying to make money to keep their cards, the tournament offered all the perks of any other regular PGA Tour event.

That much was evident when a yellow Masters flag was stuffed into the silver trophy.

Walker played Augusta National for the first time about five years ago with his dad and a member. He can't wait to go back for the Masters.

Koepka was playing on a sponsor's exemption that he received without asking – tournament officials identified him as a potential star when he started the year with no status on any tour and won three times on the Challenge Tour to earn his European Tour card. He qualified for the British Open the day after his third Challenge Tour win.

He was between stops in Scotland and Shanghai, and now his plans are slightly altered. Koepka's finish gets him into Las Vegas next week before he goes back to the European Tour for the BMW Masters in China.

Billy Hurley III closed with a 68 and NCAA champion Max Homa from Cal birdied two of the last three holes to tie for ninth. That gets them in Las Vegas.

Koepka won all of his Challenge Tour events in Europe with the 54-hole lead, experience he figured could only help. For eight holes, he was on the verge of running away from the field. Koepka rammed in a 45-foot birdie putt on the sixth hole to reach 17 under, and when Singh in the group ahead three-putted the seventh for bogey from about the same range, the Floridian had a four-shot lead.

It was gone in four holes.

Koepka had about a 15-foot birdie putt from the collar of the par-5 ninth green that went about 3 feet by the hole. But the stroke on his par putt looked a little quick, and it caught the left lip and spun out for a bogey. On the par-3 11th, he pulled a 6-foot par putt. That dropped him into a tie for the lead with Walker, who was in the group ahead and had made a 15-foot birdie on the eighth and a two-putt birdie from long range on the ninth.

They traded birdies – Koepka with a 3-footer on the par-5 12th, Walker with a 30-foot putt from the fringe on the 13th, setting the stage for the decisive stretch at CordeValle – a par 5 that could be reached in two, the par-4 17th that played 297 yards over the water, and a closing hole that required only a flip wedge with a big drive.

And that's where it was decided.

''I can't get too down on this week,'' Koepka said. ''I know I'll be criticized. But this year has been amazing. This week I played well. It happens to the best of them.''