Watson gets first win since '12 Masters at Riviera 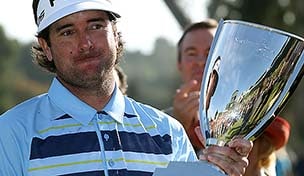 LOS ANGELES – Bubba Watson lost track of time. He didn't realize it had been nearly two years and 41 tournaments since his last victory.

A reminder came Sunday afternoon, after he birdied the 18th hole to win the Northern Trust Open by two shots. Walking up the steps to the clubhouse he saw his son, Caleb, who was adopted shortly before Watson won the 2012 Masters.

Watson was alone in his green jacket that day. This time, wife and son were at Riviera to watch a masterpiece.

He played the final 39 holes without a bogey. He had a 64-64 weekend. He made up a four-shot deficit in six holes, and closed with the lowest round by a winner of this tournament in 28 years.

This wasn't ''Bubba'' golf. It simply was great golf. And he couldn't wait to celebrate.

''When I won the Masters, it was just me,'' Watson said. ''Family members were there, but not my wife and not my son, who was just adopted at that point, and now is two weeks away from being 2 years old. What a thrill. We'll have some pictures with him and my wife and the trophy, so it's nice.''

Watson won by two shots over Dustin Johnson, who closed with a 66 for the second straight week and got the same result – second place. Johnson finished one shot behind Jimmy Walker last week at the AT&T Pebble Beach National Pro-Am.

''When you shoot 14 under on the weekend, it's tough to beat that,'' Johnson said.

Watson, who started the final round four shots behind William McGirt, made up ground so quickly that he broke out of a four-way tie for the lead with a birdie on the eighth hole and made the turn in 30. Equally critical were a pair of par saves with 7-foot putts on the 12th and 13th holes.

It was quite a turnaround from his last event, the Phoenix Open, where Watson made two late bogeys and finished one shot behind Kevin Stadler.

Presented another chance, he wasn't about to let this one get away.

Watson finished at 15-under 269, and he wasn't the only big winner.

Jason Allred, who went to college up the coast at Pepperdine, played bogey-free for a 68 and tied for third with Brian Harman, who also had a 68. Allred was a Monday qualifier, and this was his first regular PGA Tour event since he last had his card in 2008.

The tie for third was a career-best for the 33-year-old Allred. He earned $388,600, which is more than he had made in his entire career, which included two full seasons on the PGA Tour. He now is exempt into the Honda Classic, which starts in two weeks - about the time his wife is due with their third child.

''We'll have fun figuring out what that looks like,'' Allred said.

Watson won for the fifth time in his career, and he had to earn it. With no margin for error over the closing holes, he managed to get out of a deep fairway bunker on the 15th hole to the front edge of the green. He smartly played to the middle of the green on the par-3 16th hole for a par. Facing the uphill tee shot on the 18th, he blasted his drive down the middle of the fairway and hit wedge into 15 feet to the right of the pin.

Johnson, meanwhile, now has finished among the top six in all four tournaments this season – including a win in Shanghai and consecutive runner-up finishes. His other start was at Kapalua, where he tied for sixth.

McGirt, who had a two-shot lead to start the final round as he tried to win for the first time, opened with a birdie and stalled after that. And on yet another gorgeous day at Riviera, this was not a day to stall.

The pack behind took aim and made birdies, particularly Watson.

Watson hit a perfect tee shot on the par-3 fourth that rode the slope to 15 feet for birdie. He holed a bunker shot from left of the sixth green for birdie. And a 15-footer on the eighth gave Watson his fifth birdie of the round, and the outright lead. He never gave it back.

McGirt closed with a 73 and tied for sixth.

Jordan Spieth, one shot out of the lead through seven holes, had four bogeys on the back nine and shot 71 to tie for 12th. Jimmy Walker, a three-time winner this season, closed with a 73 and tied for 20th.

''My first win since the Masters,'' Watson said. ''You never know when your last win is going to be. My last win could have been the Masters, which would have been a great way to go out. But winning here at Northern Trust is nice. I never felt down that I haven't won yet, but just kept plugging along. And somehow, it fell in my lap today.''