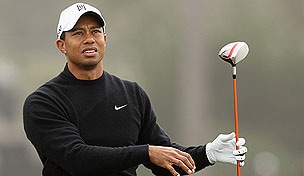 PEBBLE BEACH, Calif. – On a day when sunshine gave way to a light rain, two things stayed the same Friday at the Pebble Beach National Pro-Am. Charlie Wi was still atop the leaderboard, and Tiger Woods didn’t hole enough putts to make up ground.

Wi escaped most of the rain at Pebble Beach, where he holed a wedge from the 13th fairway for eagle and limited the damage to a bogey on his final hole for a 3-under 69 that allowed him to open a three-shot lead.

Dustin Johnson was caught off guard by the rain in the worst way. He stood in the fourth fairway at Spyglass with a short-sleeve shirt, hands thrust in his pocket, as his caddie sent a friend running up the hill to the parking lot to retrieve his rain gear. His short game let him down, and the two-time Pebble champion had to settle for a 72 that put him three shots back.

Padraig Harrington had a 66 at Pebble Beach and was among those tied for third. Harrington had five birdies in a six-hole stretch early in his round, the exception coming at the par-5 sixth.

Woods, meanwhile, again looked poised to make a move over at Monterey Peninsula. He missed a five-foot birdie putt on No. 9 and failed to make birdie on the par-5 10th when he pulled his second shot into the gallery. He had to settle for a 2-under 68, leaving him six behind.

Along the way, he stung his wrist hitting out of a divot and said he had to pop it back into the joint.

The bigger deal was putting. Woods took 33 putts on the Shore Course, which he attributed to leaving the ball in the wrong spot—mostly above the hole— and struggling with greens he felt were getting slightly more bumpy as a mist turned into a light rain.

“It’s very close,” said Woods, playing this event for the first time in 10 years. “I got my ball-striking to where I feel very comfortable hitting the shots. I just need to make a couple of putts to get on a roll.”

Phil Mickelson struggled in sunshine. In rain, he ran off five birdies for a 65 at Monterey Peninsula that put him five shots behind.

“I don’t know what happened, but I started to play a lot better and make some birdies,” said Mickelson, a three-time winner at Pebble. “In the perfect conditions, I struggled. But to play these golf courses in such great condition either way has been a lot of fun.”

Wi was at 12-under 130 and now heads to Spyglass Hill, which has played slightly tougher than the other two courses.

In these shifting conditions, Spyglass played about two shots harder than it did Thursday, while Pebble Beach and Monterey Peninsula were about one shot more difficult than the day before.

Only 56 players broke par, compared with 87 in the opening round.

That would explain what was going through Wi’s mind when he set off at Pebble Beach, knowing the course gave up a pair of 63s in the opening round. It sure didn’t feel that easy.

“I thought Pebble played really difficult today,” Wi said. “The greens were very firm, and the guys that shot 8 or 9 under out there, I was very surprised how well they played. Some of the pins were really tricky. I said, ‘Gosh, how did they shoot 9 under out there?’ And for me to shoot 3 under today, I was very pleased.”

That didn’t work out so well. He pulled his approach into a crevice of thick rough, chopped out over the green, and only a good pitch to tap-in range helped him avoid something worse than a bogey.

Vijay Singh had a 68 at Spyglass Hill, and Brian Gay had a 65 at Monterey Peninsula to join Harrington among those at 8-under. Hunter Mahan, fresh off his one-week journey to the Middle East for the Qatar Masters, had a 70 at Pebble Beach and was in the group at 7-under, along with Mickelson.

Woods looked sharp at times, drilling a 5-iron to seven feet for birdie on the opening hole, narrowly missing an 8-foot eagle attempt at No. 6 and making a second straight birdie on the par-3 seventh from about 15 feet.

But he didn’t make up any ground, losing one shot to par compared with the leaders. Next up for Woods is Pebble Beach, where he usually plays his best. Woods still remembers the 63-64 weekend in 1997, when he finished one shot behind Mark O’Meara. Woods also had a 64 in the final round of 2000 to rally from five shots behind.

He has three rounds of 64 or better on the fabled course during the AT&T Pebble Beach National Pro-Am.

The last time he played Pebble Beach was the U.S. Open in 2010, where he bogeyed five of his opening 10 holes to fall out of contention. His game was in disrepair at the time. It now is on an upward swing, and the putting is all that controls how quickly he gets back.

“I’m hitting good putts,” Woods said. “I’m not displeased with my putting at all. I just didn’t hit the ball in the right spots to give myself the right looks. If we were putting smooth greens, it would be a totally different deal.”

Johnson was tied for the lead with back-to-back birdies to close out the back nine at Spyglass. He bogeyed the par-3 third from about 12 feet away just behind the green, then three-putted for bogey at the par-3 fifth.

They weren’t even pitch shots. They were dink chips, ones that you’re trying to hole. And I just hit them terrible.”

Johnson will have a chance to make up ground Saturday at Monterey Peninsula, which has produced the lowest scores this week.

Woods, meanwhile, settles in at Pebble Beach with the celebrity rotation, the day that CBS Sports typically spends as much time on the antics of actors and comedians as the golfers.

That shouldn’t be a big distraction, though. Woods tees off early on the back nine, away from all the action.