Woods in contention through 54 holes at Pebble 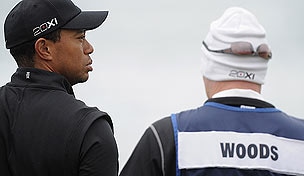 PEBBLE BEACH, Calif. ' Charlie Wi played bogey-free at Spyglass Hill for a 3-under 69 to build a three-shot lead Saturday in the Pebble Beach National Pro-Am. Now its time for him to face his demons of self-doubt'along with a familiar force in golf.

Tiger Woods took another step toward showing his game is nearly back. He ran off five birdies in a six-hole stretch early in his round at Pebble Beach and had a 5-under 67 that put him four shots behind going into the final round, the closest he has been to the 54-hole lead in a regular PGA Tour event since the 2010 Masters.

With a new swing, its starting to look like the old Tiger.

But the scenario doesnt change, Woods said. The ultimate goal is to win a golf tournament.

Thats something Wi has never done in 162 previous PGA Tour events. Wi, who was at 15-under 199, has a 54-hole lead for only the second time on tour. He had a one-shot lead at Colonial last year and was runner-up to David Toms.

This time, Wi will be in the last group with someone in a familiar spot. Ken Duke, who is winless in 142 starts on the PGA Tour, shot a 65 at Monterey Peninsula.

The last two weeks havent been too kind to 54-hole leaders. Kyle Stanley lost a five-shot lead at Torrey Pines, and Spencer Levin blew a six-shot lead the following week in the Phoenix Open. Both were going for their first PGA Tour wins.

I havent really thought about that, Wi said, when asked if it were a blessing or a burden to be in front. But I enjoy being in the lead. Its a lot more fun than trying to come from behind. I know that tonight is going to be very exciting, and Im sure I wont sleep as well as if Im in 50th place. But thats what we play for, and Im really excited.

Along with Woods in the hunt, Phil Mickelson managed to stay in contention despite playing the par 5s at Pebble Beach in 1 over. He saved par on the 18th for a 70. That put him in a tie for fourth, six shots behind, and set up a date with Woods in the second-to-last pairing.

Padraig Harrington was chasing the lead until a sloppy finish at Spyglass Hill'a bogey on the par-5 seventh and a double bogey on the eighth. He had to settle for a 72 and dropped seven shots behind into a tie for ninth.

Even so, it served up quite the finale for Sunday.

Its really fun, especially when the big guys are up there, Duke said. Thats when everyone is out there watching. If you do perform well and play well, they will be watching you, as well. Its going to be fun.

With a short burst of birdies, it looked as though Woods was having a blast.

Coming off his lone bogey at No. 12, Woods looked as though he were headed for another one. From the left fairway bunker on the 13th, he overcut his 9-iron so much that it was headed for deep rough right of the green. Instead, it bounced off a mound back toward the green, took the grain and settled a foot beneath the hole for a tap-in birdie.

Woods watched the ball take the hard hop, listened to the gallery around the green cheer wildly, and just smiled.

Looked like I was having a tough time making par, and I was making birdie, and off we go, Woods said. Sometimes, we need those type of momentum swings in a round, and from there, I made some putts.

He rolled in a 10-foot birdie putt on the 14th, then had a 25-foot putt up the slope on the 15th. One of the amateurs in his group had a similar putt, so Woods was able to look at the break. He learned well, extending his left arm as he often does before the putt drops. And it did.

Woods made good birdie putts from 20 feet on the 17th and eight feet on the 18th, where he also got a small break. Not wanting to hit driver in the first place because he couldnt reach in two, he came out of the shot. It looked like it might go out-of-bounds until it hit a CBS spotter and settled behind the bunkers.

Woods made an easy birdie on the par-5 second, but that was it. He had to save par on the short par-4 fourth from a bunker and didnt give himself enough good looks the rest of the way.

No matter. He moved up the leaderboard, higher than he has been in some time on this tour.

Woods doesnt distinguish between tours, or even official events. Winning is winning. Losing is losing. All he sees at the moment is progress, and its hard to deny it.

Wi is making his own brand of progress, getting more comfortable with his swing and being in contention. He talks often about the demons in his head, which is typical of most any golfer.

DIVOTS: Joseph Bramlett, playing on a sponsors exemption, made an albatross on the 11th hole at Spyglass when he holed out from 187 yards with a 6-iron. He negated that with two double bogeys and shot 73. Among the amateurs to make the cut were Dallas Cowboys quarterback Tony Romo, New England Patriots coach Bill Belichick and Oklahoma coach Bob Stoops, who is playing Pebble Beach for the first time.