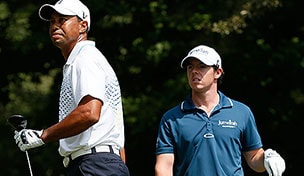 ATLANTA – In the one week Tiger Woods had away from golf during the FedEx Cup playoffs, Nick Faldo said he had lost his aura, Greg Norman said he was intimidated by Rory McIlroy and Johnny Miller claimed that Woods once wanted lessons from him.

Even better was to be back on the course Thursday at the Tour Championship, where Woods had the final word for at least one day. He kept the ball in play at East Lake, chipped in for one of his six birdies and wound up with a 4-under 66 for a share of the lead with Justin Rose.

It was the first step toward what Woods hopes is a third FedEx Cup title, and another $10 million bonus.

''I probably could have gotten a couple more out of it,'' Woods said about his opening round. ''But I was probably right on my number.''

McIlroy, playing with Woods for the fifth time in these FedEx Cup playoffs, got up-and-down from short of the par-3 18th hole for a 69. McIlroy is trying to become the first player since Woods in 2006 to win three straight PGA Tour events in the same season, and he wasn't overly alarmed by his start.

''Wish I could have shot a couple shots better,'' McIlroy said. ''But I'm in a good position going into tomorrow.''

The week began with Norman saying that Woods was intimidated by McIlroy, a suggestion that both players found amusing. While it's doubtful that inspired Woods, he played as if he wasn't ready to let McIlroy win a third straight playoff event and capture the FedEx Cup.

McIlroy, who has won three of his last four tournaments, and Woods are among the top five seeds at East Lake who only have to win the Tour Championship to claim the largest payoff in golf. Woods wasn't interested in what anyone else was doing.

''Just winning,'' he said. ''Winning takes care of everything.''

Jack Nicklaus even weighed in on Norman's comments to FoxSports.com. Nicklaus was doing a radio interview with ESPN 980 in Washington when told about Norman's remarks that McIlroy intimidated Woods. Nicklaus said playfully, ''Quiet, Greg. Quiet. Down, boy.''

''I think Tiger has a lot of wins left in him,'' Nicklaus said. ''He does have a lot more competition. During the couple of years when Tiger wasn't really there, all of a sudden you have Rory McIlroy, Keegan Bradley and I could probably name a half-dozen other guys that have all won and learned how to win in Tiger's absence. They're not scared of him anymore.''

Rose, who hasn't won since the World Golf Championship at Doral in March, swiftly moved up the leaderboard late in his round with three birdies over the last five holes, and the last one was memorable. From the back of the green on the par-3 18th, Rose faced a 50-foot putt with some 20 feet of break from right to left. It looked wide the whole way until it snapped back toward the cup.

Equally impressive was chipping in from some 20 yards short of the 14th green for the birdie that started his big run.

Rose is 24th in the FedEx Cup, meaning he would have to win and everyone at the top of the standings would have to falter. The way Woods started, that looked improbable. Rose checked the leaderboard early on, not to see his projected standing, but to get an idea of how the course was playing.

That part was easy to decipher. On a warm day, with the sun finally breaking through cloud cover in the middle of the afternoon, no one was tearing up the place.

''Obviously, I realized it was time to be patient,'' Rose said. ''No one was really going low ... so I always had that in the back of my mind.''

Scott Piercy ran off three straight birdies late in his round until he stumbled in the rough behind the 18th green and finished with a double bogey for a 67, tied with Steve Stricker, Matt Kuchar and Bo Van Pelt. Stricker was the only player in the 30-man field without a bogey.

Hunter Mahan appeared to snap out of his funk from missing out on the Ryder Cup with a 68, tied with a group that included Brandt Snedeker, who is among the top five seeds. The others are Phil Mickelson, who opened with a 69, and Nick Watney, who brought up the rear with a 75.

Despite the Tour Championship featuring the top 30 on the PGA Tour, the focus again returned to the top two players.

A boisterous gallery lined the fairways and crowded behind every green to see the latest edition of Tiger and Rory, and they didn't disappoint. McIlroy is playing East Lake for the first time, and he struggled with the Bermuda rough around the greens.

''If you don't hit fairways, it's hard,'' McIlroy said. ''If you hit the ball in the rough here, it's very, very difficult to get any control on your ball.''

Woods again had McIlroy's number when playing together, even though Boy Wonder is winning more trophies. Woods has posted the lower score in four of the five rounds they have played together in the playoffs. The exception was Crooked Stick, when McIlroy opened with a 64 and Woods had a 65.

Woods, as usual, didn't read too much into that.

''I enjoy playing with Rory,'' he said. ''He's a great kid. Over the years, there are certain pairings for me that I've enjoyed, and Rory is one of them.''

Woods has three runner-up finishes and a win the last four times he has played at East Lake, a course he likes because of the traditional look to it.

''Trouble is just right there in front of you,'' Woods said. ''It's very simple, but it's hard. It's rare that you see guys go low here, but it's very simple. Really, not a lot of trouble out here, but guys just have a hard time getting it low out there.''

Woods holed a 20-foot birdie putt on the second hole and stuffed a wedge into 5 feet on the third to get on track. He made bogey from the bunker on No. 4, and took another bogey on the 14th when his drive sailed into the rough. The Bermuda grass isn't high, but it's thin enough for the ball to sink to the bottom and make it difficult to reach the green, much less keep it on the green.

McIlroy didn't feel he was at a disadvantage playing the Tour Championship for the first time. He saw the course as Woods did – keep it in play, keep the ball below the hole.

''I felt like I hit the ball pretty good,'' McIlroy said. ''So just go out there tomorrow and try to play the same way, and maybe hole a few more putts and turn what I shot today into something in the mid-60s.''