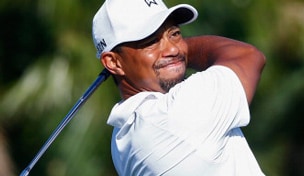 PALM BEACH GARDENS, Fla. – Tiger Woods had his lowest score on the PGA Tour in seven months and left the Honda Classic on Saturday assured of only one thing.

At least he gets to play on Sunday.

Woods, who missed a 54-cut at Torrey Pines in his only other PGA Tour event this year, was never in serious danger of repeating that. He made seven birdies, one by chipping in from 50 feet left of the 11th green, and finished with a 5-under 65.

He was just inside the top 10 when he ended his round – more than two hours before Rory McIlroy was to tee off in the third round. Woods was still six shots behind. So was Luke Guthrie, the second-year tour player from Illinois who played alongside Woods for the first time and made a bold birdie on the 18th to match his 65.

''Wish I could have gotten one of the last two coming in – would have been nice,'' said Woods, who missed birdie putts of 15 feet on the last two holes. ''But Luke and I both played well today. It was a good round for both of us. I felt a lot better. I didn't hit the ball very well yesterday; just kind of grinded it out. Today I struck the ball well and made some putts.''

It was his best round on the PGA Tour since a 61 in the second round of a runaway victory at Firestone. Then again, this is only Woods' seventh PGA Tour event since then, and he did have a 63 in Turkey and a 62 at his 18-man charity event in California in December.

He still looked sloppy at times. He made bogey on the 395-yard fourth hole with a drive so far right that he had to lay up from deep rough. He dropped another shot on the ninth when he went from the rough to well right of the green, leaving him no chance to get it closer than 15 feet.

But that was his last bogey, and he seemed to gain confidence toward the end of his round until three good looks at birdie failed to drop.

Guthrie played equally well and had a blast in his first pairing with the world's No. 1 player. Guthrie, who shared the 54-hole lead at the Honda Classic a year ago, was stunned to see so many people show up for a 7:38 a.m. tee time, a crowd that looked like Sunday afternoon for most players when they made the turn.

''I'm sure it's a different atmosphere when you're first out,'' Guthrie said.

Even though it was just an early tee time on a Saturday, Guthrie said he was paying attention to Woods – especially his score – throughout the round.

Was he trying to beat him?

''Heck, yeah,'' he said with a laugh. ''I wanted to learn and play well. I might get another try tomorrow.''

Guthrie had 246 yards into the wind on the par-5 18th and considered laying up. He then chose to hit 3-wood, hopeful of staying left of the water to get into a bunker. He flushed it right at the flag and came up a yard short of the green, into a bunker. From there, he hit a long bunker shot to a foot from the cup, a shot that probably would have received twice the roar had it been struck by his playing partner.

Asked what he learned from Woods, Guthrie said it was watching him put together a good score without doing ''anything crazy.''

''It was playing hard and getting the most out of your round,'' he said. ''Nothing I shouldn't be able to do.''