A 'Method' to Tiger's victory 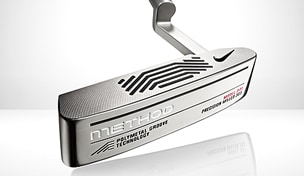 It seemed like old times to see Tiger Woods rolling in crucial birdie putts on the final two holes at the Chevron World Challenge. But it was a new day for Nike as Woods won for the first time using the company’s Method putter.

After months of testing, Woods and Nike designers found themselves on the same page with a putter with which he could be comfortable. More than 50 Method putters were made for Woods, ranging from hand-made prototypes to off-the-shelf stock putters. To find the right one took a great deal of work from all involved.

“Every characteristic of a putter is important to Tiger,” said David Franklin, whose title is Master ModelMaker at Nike and specializes in putters. “Obviously, specs like loft, lie, length and weight must be spot on. Those are actually easy; it's the nuances and details that are the most difficult and the most important to Tiger.

“His Method putters are machined like any other, but his is extensively hand worked to achieve perfect blends and angles. The characteristic of feel is very important to Tiger. The putter must give him a very specific audible feedback.”

The Method features a polymer insert and face grooves that the company says improves the roll off the putter face. Woods was particularly discerning in this area.

“At first, Tiger tested various polymers for us so we could dial in the feel that he preferred,” Franklin said. “Then, we tried different groove configurations to get the desired ball roll. From there it was shape and fine details. It took several months of testing before Tiger put one in play at a professional event.

“Feedback from Tiger and all of our athletes was crucial in determining putter shapes, the specs for optimum performance and materials needed for preferred feel. Tiger will tell you when he likes something, but better than that he pulls no punches when he doesn't like something. Like it or not, negative feedback always makes for a better product.”