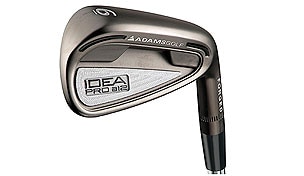 When Adams Golf announced this week that it was seeking “strategic alternatives” to increase shareholder value, many took that as a sign the manufacturer was putting itself up for sale. While that is a possibility, CEO Chip Brewer says it is just one of a broad spectrum of possible outcomes.

“We are looking at all options,” he said in a telephone interview on Friday. “The one everyone is focused on is the sale.”

Adams has hired Morgan Stanley which worked through the sale of Acushnet.

“They recognize we're a great company,” Brewer said. “That's when you want to engage someone like Morgan Stanley.”

Morgan Stanley has been instructed to explore all options, including stock-based moves like creating a dividend or buying back shares, to acquiring another company.

“We can't eliminate anything at this point,” he said.

The December impetus for the pursuit of these alternatives is a belief shared by Brewer and the board of directors that their company is undervalued in the marketplace.

“We have gained market share, have a good outlook, are growing faster relative to our industry, have no debt and a wonderful balance sheet,” Brewer explained. “We're having difficulty getting fully recognized in public markets.”

Adams Golf (NASDAQ: ADGF) is a $100 million public company and is light on value compared to other traded behemoths. On some days, the volume of the stock is so light that just $10,000 of equity changes hands. With such low volume, large institutional investors are not a part of the action. Brewer hopes increasing the value of the stock will change that.

The day after the Jan. 4 announcement was made, $560,000 were bought and sold, but most of them were bought. The stock opened 15 percent higher than the previous day. Asked if making the announcement alone increased shareholder value, Brewer laughed and said, “I guess it did.”

No matter the outcome, Brewer hopes the process will reveal where Adams really is.

“I have seen people saying on the internet, 'Oh, they must be doing this because they're in financial trouble.' That's maddening because it could not be further from the truth. We're a company on a roll.”