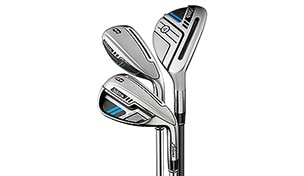 In conducting extensive research on people with handicap indexes of 15 or more, engineers at Adams Golf found that those players usually made contact near the toe of the club, and not in the traditional sweet spot. Which meant that most of their shots were mis-hits.

So, the company went to work on a way to enhance face speed in the area where golfers of that ilk needed it most.

The result is an updated version of the Adams’ super game improvement New Idea irons. The key feature with these clubs is the so-called wraparound slot, which starts from the heel area and covers the sole around the head to the top line. It is designed to generate higher ball speeds and more forgiveness, especially on off-center shots, by creating a spring-like effect across the entire face.

“With a concentration on developing technology that golfers really need, we created these industry-first wraparound slots to compensate for a very common mis-hit,” says Justin Honea, senior director of research and development at Adams. “New Idea irons are definitely our easiest to hit, with measurable improvements in ball speeds and forgiveness where players require it most.”

According to Honea, the standard set of the latest iteration of New Idea starts with three of the company’s newest New Idea hybrids – Nos. 3, 4 and 5. They feature refined Cut-Thru sole slots that are also made to produce greater ball speeds as well as higher launches and additional distance. In addition, they come with Adams’ patented upside-down shape that puts more surface area lower on the face where golfers at this level generally make contact. That creates a lower center of gravity that helps launch the ball higher while reducing spin.

From these hybrids, players can go to the transitional New Idea irons, Nos. 6 and 7, and then to the three scoring sticks, Nos. 8 through pitching wedge, all of which have wraparound slots.