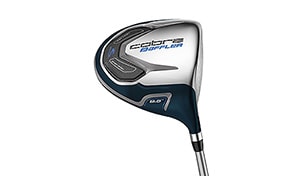 Getty Images
Dustin Johnson hits his tee shot on the sixth hole during the first round of the Northwestern Mutual World Challenge at Sherwood Country Club on December 5, 2013 in Thousand Oaks, California. (Photo by Stephen Dunn/Getty Images)
-

In celebration of the 40th anniversary of the infamous Cobra Baffler, the California equipment maker has released a new line of drivers, fairways and hybrids under the brand name Baffler XL.

Of all those offerings, company technicians seem particularly taken with the driver. They say that its biggest selling point is its clubface, where they have not only increased the effective face area but also lowered the center of gravity to make the driver longer and straighter as well as easier to hit.

How big an increase? Cobra officials say the Baffler XL face is 17 percent larger than the one on Cobra’s Amp Cell Offset driver, and add that they have boosted the effective face area by 21 percent. More of the Baffler XL face is located above the low CG for optimized spin and more consistent launch conditions.

At the same time, the trampoline effect is enhanced to give golfers more consistency and length with hits across the face. In addition, a new, high-moment-of-inertia sole is made to work with an offset design for increased stability.

Cobra employs a legion blue color with this product and makes it available in 9.5-, 10.5- and 11.5-degree heads in right-handed models, with Stiff, Regular and Lite shafts. Left-handed versions come with 10.5 degrees of loft and the same shaft flexes. All are equipped with Cobra Lamkin REL EPDM Reminder grips.