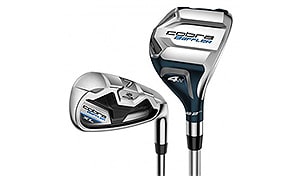 This just in ... golf is hard. It's frustrating. Sometimes you just feel like throwing in the towel. Then with one swing of the club, all of those feelings disappear and you remember why you fell in love with the game. It is what makes the sport so gratifying when you do play well. So the good folks at Cobra Golf are making it easier for you to make those kinds of swings consistently – the swings that make you not hate golf – by bringing back their Baffler XL line of clubs.

For the average player who doesn't like to practice (me), consistency is everything, not necessarily consistent good shots, but consistent not-so-bad shots are key. And that's what the Cobra Baffler XL line delivers – it's really hard to mis-hit these clubs.  It did take a little convincing however.

For starters, they look a little funny at first glance. But you will get over that after about your fourth or fifth shot down the middle of the fairway. The first thing you will notice is the absence of long irons. In their place are a 4-hybrid, 5-hybrid and 6-hybrid, and I have to tell you I couldn't be happier about that decision. I don't remember the last time I stood over a 4-iron with any sort of confidence. But the technology put into these clubs, especially the wide rail soles which deliver improved turf interaction and less drag, had me hitting the ball farther and more importantly straighter, than anything I've ever tried in the past.

Then you get into your actual irons, 7-iron through gap wedge, which all feature a deep undercut cavity and oversized face, along with the same wide rail soles on the hybrids. I won't bore you to death with how exactly the technology works, but the "trampoline effect" that has been built into these clubs is outstanding to watch, and even better to feel, without hardly any effort put into the swing. I've never hit balls higher. It didn't necessarily translate into more putts falling, but that's a me problem.

[[{"type":"media","view_mode":"media_original","fid":"504481","attributes":{"alt":"","class":"media-image","height":"297","style":"line-height: 1.538em; display: block; margin-left: auto; margin-right: auto;","typeof":"foaf:Image","width":"585"}}]]Cobra Golf engineers put the same thought process into the Baffler XL fairway woods and driver. Clubs for people who want to swing easier, yet hit the ball higher, farther, straighter and miss less often. The fairway woods performed very similar to the hybrids, and while all of the club faces are a little offset to fight the dreaded slice and promote a draw, it is most notable –and most effective – on the driver. I struggle with the slice and I write this today telling you I could not miss to the right with this driver in my hands. And while it's not part of this new adjustable trend, Cobra has a Baffler driver for everyone, offering them in 9.5-, 10.5- and 11.5-degree lofts.

But don't just take my word for it, watch the video below from the guys who actually designed the clubs. After hitting the Baffler XL line, I came away excited about my game, not dreading the next time I decide to tee it up. And it sounds like that's exactly what they were striving for.

The entire Baffler XL line comes in graphite or steel stiff, regular or lite shafts and feature Lamkin REL EPDM Reminder grips. You can order any of the Baffler XL clubs or an entire set at Golf Galaxy. For more information, check out Cobra Golf online.