Big Bertha back with vengeance at Callaway 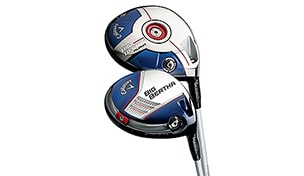 Getty Images
SHEBOYGAN, WI - AUGUST 14: Adam Scott of Australia plays his shot from the 16th tee during the second round of the 2015 PGA Championship at Whistling Straits on August 14, 2015 in Sheboygan, Wisconsin. (Photo by Kevin C. Cox/Getty Images)  -

Big Bertha is one of the most iconic brands in golf history, so it is not surprising that the release of a pair of Callaway drivers bearing that appellation is creating some excitement. After all, it has been seven years since the company sold a product bearing that name.

But this is not in any way an exercise in nostalgia. In fact, company engineers are touting these offerings – the Big Bertha and the Big Bertha Alpha – as true technological breakthroughs.

According to Luke Williams, senior director of global woods and irons at Callaway Golf, the new Big Bertha driver boasts four key features, starting with a sliding, 8-gram weight set on a 5-inch track on the perimeter of the 460 cc head that is designed to help players optimize shot shape and distance while controlling dispersion.

A Hyper Speed Face is intended to enhance forgiveness on off-center hits, and an advanced adjustable hosel allows golfers to independently manipulate loft and lie.

As for the Big Bertha Alpha, it, too, comes with a 460 cc head. Only this one is more compact and pear-shaped. The club also features the Hyper Speed Face and the Advanced Adjustable Hosel. But what really sets it apart is the so-called Gravity Core, which lets players adjust spin independently of launch angle – and which Williams says is an industry first.

The core sits within the clubhead in a carbon tube that connects the crown and sole and has a tungsten end and a glass fiber-reinforced body. When the tungsten end is inserted closest to the sole, it creates a lower center of gravity and lower backspin, which produces a flatter, more penetrating trajectory accompanied by greater rollout. Turn it around, and the driver assumes more of a mid-CG position, which nurtures a more controlled, workable ball flight with less rollout.

In addition, the Big Bertha Alpha gives golfers the option of making adjustments to CG bias and varying the shapes of their shots through four interchangeable weights in the heel and toe.