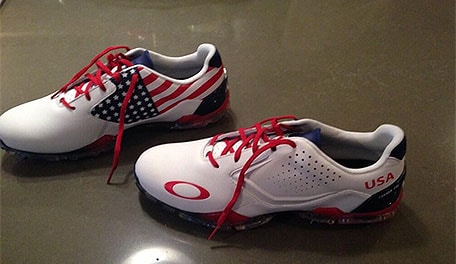 The fireworks up in the sky might be the main attraction on Indepedence Day, but a quick look down low on Friday at The Greenbrier Classic showed plenty of patriotism.

Bubba Watson teased a special Stars and Stripes version of his Oakley Carbon Pro 2 shoes on his Twitter account Thursday night, and they didn't disappoint on July Fourth, where he rocked them around The Old White TPC to the tune of a a 3-under 67, enough to vault him into the conversation heading to Moving Day.

The Oakley Carbon Pro 2 is the top of Oakley's golf shoe line, with features such as waterproof full-grain leather, Oakley's Red Code cushioning foam and Coreflex Technology for comfort and flexibility.

Unfortunately, it looks as though the version Watson was wearing on the Fourth of July is a special edition not available to the general public, but the standard models - good enough for Bubba's Masters victory just four months ago - come in black, white and an ivory treatment with gray and orange accents for $199.99. You can find more information or purchase them at Golf Galaxy.