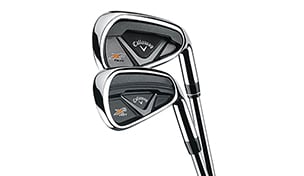 In addition to drivers, fairways and hybrids, Callaway’s X2 Hot family boasts a pair of new iron offerings. One is a standard version and the other a pro model for better players, and company engineers say that as is the case with the other clubs in the line, these are designed to be longer, faster and more forgiving for a broad range of golfers.

The Standard X2 Hot irons feature a deep central undercut that is made to boost ball speeds for increased distance. They also utilize a stabilizing arch to optimize stiffness distribution across the face for improved sound and feel, while moving the hot spot lower on the face to be more in line with a player’s usual impact location.

Technicians estimate that high moment of inertia combined with a repositioned center of gravity and improved turf interaction improves downrange consistency by as much as 40 percent, making it in their view the most accurate long-distance iron Callaway has produced.

The X2 Hot Pro irons come with a thinner face and a uniquely designed stabilizing arch that moves the weight in the club low and center, so it retains its ability to produce high ball speeds but without an undercut cavity and in a compact shape that is more appealing to better players. These sticks also have a greater progression in offset and CG height, which helps retain forgiveness in longer irons while making short irons easier to control.