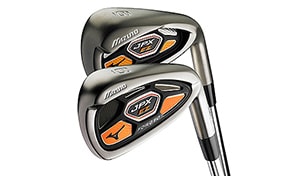 In bringing out its latest generation of JPX game-improvement clubs, Mizuno is giving golfers two options, with one being a cast product and the other forged.

According to Chuck Couch, vice president of product development for Mizuno’s golf division, the big news with the cast JPX EZ is its improved forgiveness, thanks to a sweet spot that he says is significantly larger than those of competing brands.

He adds that these irons utilize Mizuno’s Hot Metal and Max COR technologies to create an ultra-thin face that delivers the highest-allowable ball speeds for maximum distance in irons 4 through 7, while a low and deep center of gravity promotes a preferred trajectory. With regards to the scoring irons, from 8 to pitching wedge, Couch says they boast a Deep Pocket cavity design intended to deliver increased accuracy with a similarly sizable sweet spot for improved forgiveness.

As for the JPX EZ Forged, it incorporates an enhanced COR face design for increased distance, while the Grain Flow forged 1025E “Pure Select” mild carbon steel used in its head construction is made to give golfers a soft and consistent feel.

Weight within the iron has been redistributed to the perimeter of the 4- through 7-irons to provide maximum moment of inertia for optimal forgiveness through the use of an Undercut Forged Cavity to allow for an expanded rebound area and an enlarged sweet spot. The iron also offers a Cortech design to bolster that “trampoline” effect for greater distance.

“The distance and forgiveness screams ‘game improvement,’ but we have been able to channel those characteristics in a Grain Flow forged iron that will change the way golfers look, think and feel over the golf ball,” says Couch. “We’re excited, as we believe the new EZ forged appeals to a wide breadth of golfers.”