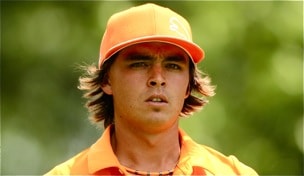 Rickie Fowler signed Monday with Cobra Golf, confirming a rumor that had been circulating for the past few weeks. Fowler has switched from Titleist to Cobra, which was purchased from Acushnet by Puma in 2010.

The manufacturer will rely heavily upon Fowler and his influence in the sport with their new AMP line of drivers, woods, hybrids and irons. In advertising previewing the release of the clubs, Fowler’s trademark orange is featured as a complementary color on the equipment.

Starting this week at the Farmers Insurance Open, Fowler will use a Cobra staff bag with the AMP driver, 3-wood and AMP Pro Prototype irons in it. He will continue wearing Puma clothing.

“I am so excited to have the Cobra sticks in my bag and be a full part of the Cobra-Puma Team,” Fowler said in a release. “I’ve been hitting the AMP driver great. I’m getting a lot more distance and the orange details look really fresh. I can’t wait to get out at Torrey Pines and put my new Cobra clubs into play.”