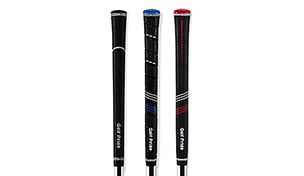 Grips generally don’t create a lot of buzz at the PGA Merchandise Show, but the latest offerings from Golf Pride attracted plenty of attention in Orlando this year, thanks to the company’s new CP2 line and an addition to its venerable Tour Velvet family.

Start with the new CP2, which is available in two models, CP2 Pro with a straight texture pattern and CP2 Wrap. According to Brandon Sowell, Golf Pride’s global sales and marketing manager, these are made to be 31 percent softer than any other Golf Pride grip.

They also employ a proprietary technology called Control Core, which consists of a 2.5-inch stabilizer located at the top of the grip designed to dramatically reduce torque. In addition, the gripmaker uses a straight taper in the lower section of this product to encourage even hand pressure for a more stable, consistent swing.

“As soon as players took a swing with CP2, they could feel the Control Core benefits,” says Sowell. “They commented that the fantastic feel and control immediately transferred to a high level of confidence as they stepped up to the ball.”

As for the newest Tour Velvet offering, it is called Super Tack, and the secret here is the use of a new material formulation in which bubbles from a liquid adhesive used in the process create a surface tackiness that company officials say make this such a strong product. In addition, they also employ a multisection grip texture to enhance the performance.

The lower section features a wider version of the “plus” sign pattern made famous with the original series of Tour Velvet grips released two decades ago, while the upper section has a diamond texture pattern to add stability in an area when maximum force is applied during the downswing.