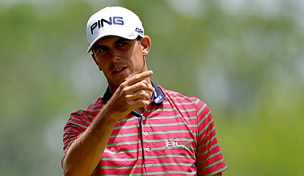 After a breakout season that included his first PGA Tour victory, Billy Horschel re-signed with Ping in a multi-year agreement, the equipment manufacturer announced Tuesday.

A winner this year at the Zurich Classic of New Orleans, Horschel also notched top-five finishes at the U.S. Open, Shell Houston Open and Valero Texas Open while advancing to the season-ending Tour Championship for the first time in his career.

'Billy is an exciting young player who has a flair for the game and a likeable personality that has made him popular with fans and fellow tour pros,' said Ping chairman and CEO John Solheim as part of a release. 'Consistency is one mark of true talent, and this year he was high up on leaderboards week in and week out, and he learned how to finish the job under pressure on Sunday afternoon.'

Financial terms and length of the agreement were not disclosed, though the deal will keep the 26-year-old in a Ping hat and staff bag while playing PING equipment.

'Continuing my association with PING gives me peace of mind as we begin the new season,' added Horschel, currently 35th in the Official World Golf Rankings. 'I have a lot of goals for this season, so it's great to have Ping in my corner.'