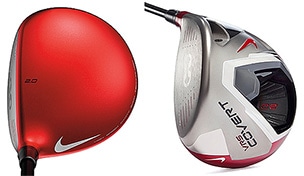 Maybe Tiger Woods' struggles with the driver are all in his head.

I had the chance to hit the new Nike VRS Covert 2.0 driver recently and all I came away thinking was, "if I had the skill of say ... the No. 1 player in the world, I don't know if I'd ever miss a fairway."

Right out of the box, the Covert 2.0 has that eye-popping look that makes you want to put it in your bag. So it's a good thing it's easy to hit because I'd want it in mine either way. While it doesn't look drastically different from last year's version, Nike did tweak it a little, adding a little white to the mostly deep red on the club head, giving it a stunning visual look. We also cannot talk about the club head without mentioning that large portion that seems to be missing from it – the cavity back. While it isn't new to the club this year, it is still essential to the driver's performance. The cavity back allows weighting to be shifted to the perimeters of the head, making this one of the most forgiving drivers on the market.

What is vastly improved this year, however, is on the the inside of the clubhead, something Nike calls Fly-Brace technology. The Fly-Brace connects the crown on the top of the sole to the bottom, creating a significantly stiffer clubhead, making it more stable and resulting in more efficient energy release in the face of the driver.

Now, I couldn't feel all of this going on as I was swinging, but I'll take Nike's word for it. All I could feel was the coming off the face solid on every single swing and staying straight as an arrow.

Other changes to the Covert 2.0 include a larger re-designed NexCOR face for increased ball speed and distance, and second-generation Mitsubishi Rayon’s Kuro Kage shafts.

The patented Nike FlexLoft system hasn't gone anywhere in 2014, so you can still adjust the loft on the driver from 8.5 to 12.5 degrees. Face angle is also adjustable to three different positions, allowing you to hit draws and fades with ease.