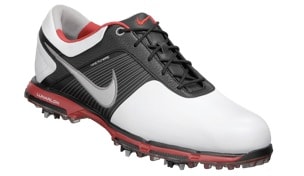 Nike Golf showcased a promotional shoe and apparel line for its athletes during the Masters and the company is at it again this week at Congressional. Select staff members will wear a limited edition version of the Lunar Control during the U.S. Open – a white shoe with black saddle, encased with a red sole and red stitching – coupled with predetermined outfits throughout the week from its latest apparel line.

“We’re excited to showcase the success of the Lunar Control by collaborating with our athletes competing at Congressional to create a limited edition color to help celebrate the U.S. Open,” Lee Walker, product line manager for Nike Golf told GolfChannel.com. “While we often do special colors for Nike Golf athletes around major championships, we’re now making this limited edition shoe available to the public as well.”

Spectators at Congressional this week will have an opportunity to purchase this limited edition version of the Lunar Control on site, and nikestore.com is offering the shoe until sold out.