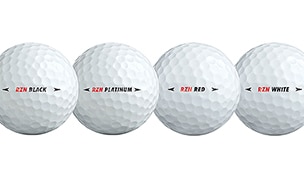 Getty Images
DUBLIN, OH - JUNE 07: A scoreboard as seen during the final round of The Memorial Tournament presented by Nationwide at Muirfield Village Golf Club on June 7, 2015 in Dublin, Ohio. (Photo by Sam Greenwood/Getty Images)  -

Decades ago, Nike famously used a waffle-iron design on the sole of its running shoes to revolutionize that athletic footwear category. Today, it is employing a similar pattern in its newest premium golf ball line, dubbed RZN (for resin), and hoping that it has a significant impact in that realm as well.

The key technology in this franchise, which includes the RZN Platinum, Black, Red and White models, is the Speedlock core. It features a surface similar to that of a waffle iron that allows the resin core to interconnect with the compression layer to form a tighter bond.

According to Rock Ishii, senior director of golf product development at Nike Golf, that helps promote better energy transfer through the layers at impact by eliminating the slipping that he says normally occurs between a traditional smooth-surface core and the outer layer.

“We knew we hadn’t pulled 100 percent of the energy that we could out of the initial RZN core, which we brought out in 2011 with the 20XI ball,” Ishii says. “Working in partnership with DuPont, we were able to develop a softer, faster RZN material and create that interlocking-core design. It works like gears locking in place with each other.”

In addition, Ishii says the RZN core and compression layer have softer compression for improved sound and feel.

Both the RZN Platinum and RZN Black are four-piece products with urethane covers that boast a new spin-optimized coating on the outer surface that is made to help grip the grooves for better control on wedge and iron shots. Currently, Rory McIlroy is playing the Black, while Paul Casey is among those Nike Golf athletes teeing it up in competition with the Platinum.

With regards to the Red and White, they are three-piece balls with Surlyn covers, for players with lower to moderate swing speeds.