Nike wedges get their grooves on 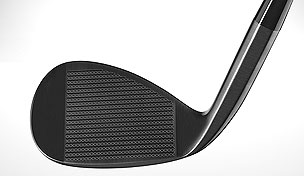 Necessity, as we all know, is the mother of invention. And nowhere in the golf equipment industry has the validity of that adage been more apparent in recent years than in the wedge category, where clubmakers have quite ably adapted to rule changes regarding grooves that took effect on the major professional tours in 2010.

Consider, for example, what Nike Golf has done with its precision-forged, VR Pro wedge line, which the company released this past spring. It put more grooves on the clubface than in previous models, and put them closer together and deeper in an attempt to ensure cleaner and more consistent ball flight and spin while still conforming to the new regulations.

At the same time, Nike engineers applied a laser cross-hatch pattern to the land area between the new grooves, adding three times the surface texture versus conventionally finished faces in the process in hopes of creating more spin in all conditions.

“This all started with a phone call from Stewart Cink at the start of last year’s golf season,” says Tony Dabbs, product line manager for golf clubs at Nike Golf. “He had had a morning tee time and found the dew on the grass was creating flyers for him out of the fairways with the new, conforming grooves. He wondered what we could do about that, and our guys went to work on a solution.”

According to Dabbs, that solution came in the form of new grooves, dubbed X3X, and the way they were laid out on the wedge face. “The genesis of the name came from the minimum spacing rule for grooves, which decrees that the land space between them must be at least three times the width of the actual grooves,” he says.

“What we found is that by going to that minimal land spacing, we were able to get more grooves on the golf ball at impact, which compensated for a lot of the groove volume we lost when the rules were changed. In a typical wedge shot with a club under the old rules, for example, you got four to five grooves on the ball. With the X3X, we can add three or four. And that added groove volume enables the clubface to wick away water and eliminate those problems Stewart was having.”