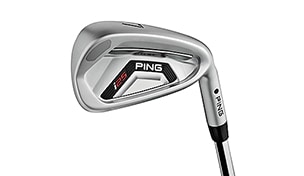 Getty Images
SHEBOYGAN, WI - AUGUST 14: Henrik Stenson of Sweden hits his tee shot on the 18th hole during the second round of the 2015 PGA Championship at Whistling Straits on August 14, 2015 in Sheboygan, Wisconsin. (Photo by David Cannon/Getty Images)  -

In describing the new i25 product line that Ping released at the start of the new year, company chairman and CEO John Solheim said they carried a common theme of increased distance and improved consistency, forgiveness and feel. And those appear to be the primary performance attributes of the new irons in that series.

Made of 17-4 stainless steel, these clubs come in a progressive set. The long irons, for example, feature head sizes and sole widths that are made to be extremely forgiving – and to be easier for players to launch shots with high trajectories. The clubs also boast narrow, face-stabilizing bars that are designed to increase ball velocity, which theoretically adds distance.

As for the more compact mid- and short irons in the i25 line, they come with narrow soles and less offset, for improved accuracy. They, too, are made with stabilizing bars, but ones that are wider than those in the longer irons. The idea here is to produce controlled, lower ball flights.

Ping engineers added tungsten weighting in the low toe area of these sticks to enhance forgiveness on off-center hits and created a machined face-and-groove system for better consistency. Clearly, they deemed cosmetics to be an equally important part of the package, as evidenced by the foggy chrome finish each iron boasts.